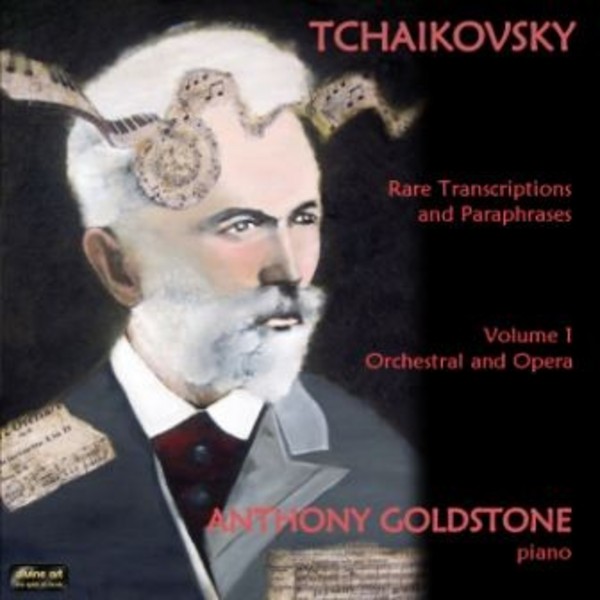 This recording is the first in a two-volume series of transcriptions and paraphrases for solo piano of music by Tchaikovsky, most of which are receiving their first recordings. Volume one concerns orchestral concert works and operatic music; the second is of his ballets.

Tchaikovsky has long been recognised as a master of piano writing, the most famous example being his Piano Concerto No.1 in B flat minor, Op.23, famously pronounced unplayable (and worthless) by the great pianist Nikolai Rubinstein but which has become one of the best loved and most performed of all piano concertos. Tchaikovsky himself made piano versions of his own works, mostly for four hands, and approved paraphrases of his works by an admired piano virtuoso such as Paul Pabst (in volume 2  Divine Art DDA25106).

Described by The New York Times as a man whose nature was designed with pianos in mind, Anthony Goldstone is one of Britains most respected pianists. A sixth-generation pupil of Beethoven through his great teacher Maria Curcio, Anthony Goldstone was born in Liverpool. He studied with Derrick Wyndham at the Royal Manchester College of Music (which later honoured him with a Fellowship), later with Curcio in London.

He has enjoyed a career encompassing six continents, the Last Night of the Proms (after which Benjamin Britten wrote to him, Thank you most sincerely for that brilliant performance of my Diversions. I wish I could have been at the Royal Albert Hall to join in the cheers), very many broadcasts and seventy CDs (including the BBC issue of his London Promenade Concert performance of Beethovens fourth Piano Concerto). He has an adventurous approach to repertoire and has been praised by Viennas Die Presse for his astonishingly profound spiritual penetration.

In the last few years Goldstone has become known for his acclaimed completions and realisations of works for solo piano and piano duet by Schubert, and for two pianos and solo piano by Mozart, all of which he has recorded on Divine Art CDs as part of an astonishingly inventive discography which has attracted acclaim worldwide.

All World Première Recordings, with the exception of Potpourri on Themes from the Opera The Voyevoda.