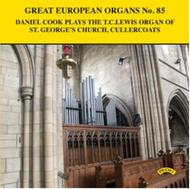 Romance in B flat major

Introduction and fugue
Prelude on a theme of Palestrina
Toccata

Postlude for a Festival

Romance in B flat major

Introduction and fugue
Prelude on a theme of Palestrina
Toccata

Postlude for a Festival

This famous organ built by T C Lewis has a rather insignificant look about it but in fact, despite the appearance, the organ is of major importance and quality, with fine tone and housed within a church set within metres of the beaches of North East England.

Priory and Daniel Cook (soon to be sub organist of Westminster Abbey) have put together a recital of English music, by Alan Gray, Stainer, Gordon Phillips, Alcock, Alec Rowley, York Bowen, Milner and a substantial Sonata by Charles Lloyd, which to our knowledge is all previously unrecorded .