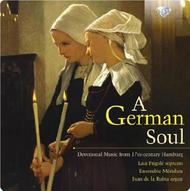 This stylishly devised programme juxtaposes cantatas by Rosenmüller, Krieger and Buxtehude with instrumental chorales and sonatas by Scheidemann, Praetorius, Tunder and Weckmann - most of these now known, if at all widely, as forerunners to Bach rather than as fine musicians in their own right as they deserve to be.

During the 17th and 18th centuries, Hamburg became a leading commercial port where material and cultural goods circulated freely. Ensemble Méridien has chosen this city as the focal point of a fascinating musical journey through northern Germany, a journey that reveals different aspects of this artistic power.

The port of Hamburg was also the driving force behind the north German organ school of the time. Churches were overflowing with magnificent organs, and their building and playing techniques reached extremely high standards, as is evident from the organ music included here.

Though most of the music in this recital has been recorded before, it has only appeared on relatively obscure labels, and not in this imaginative context where one may more fully appreciate its dramatic as well as musical merits.

Founded in Barcelona in 2010, Ensemble Méridien is an early-music ensemble of young musicians. This is its first recording.