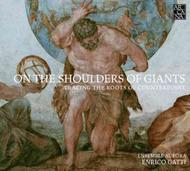 On the Shoulders of Giants: Tracing the roots of counterpoint

Sonata VII a 4 in D minor

Sonata VII a 4 in D minor

Enrico Gattis eighth recording for the Arcana label, and the debut album by his Ensemble Aurora in the role of string quartet, is without a doubt the most original of his discography.

The result of years of research and discoveries, 'On The Shoulders of Giants' is an exciting journey back to the roots of string quartet writing and counterpoint: from Renaissance tablatures to Mozarts famous String Quartet in G major KV387, the first of the Haydn Quartets, by way of Dario Castello, Johann Rosenmuller, Johann Sebastian Bach (the fourth counterpoint from The Art of Fugue) and the inevitable Corelli (Fuga a Quattro voci) - a concentration of beautiful music, with a programme that encompasses different periods but with a clear main theme, which Enrico Gatti describes so well in his authoritative liner notes: A journey into the philosophy of counterpoint: through the centuries and works of some of the greatest composers, the fugue unveils the sense of a conversation in which the instruments renounce their own individuality in order to blend together in spiritual transendance. Standing upon the shoulders of these giants of the past, we moderns can see far into the distance and forever regain our innocence