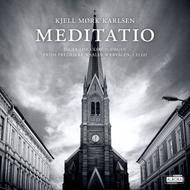 Works for organ and for unaccompanied cello by the contemporary Norwegian composer and musician Kjell Mørk Karlsen are presented on this unusual CD.

Kjell Mørk Karlsen was born in 1947 and is a composer with a versatile musical background. After graduating from the Oslo Music Conservatory as an organist and precentor in 1968, he studied organ under Finn Viderø in Copenhagen and composition under Joonas Kokkonen in Helsinki. Today he devotes most of his energy to composing, but his career as a musician ranges from having been an oboist in the orchestra of the Norwegian National Opera to appearing as a keyboard musician with various orchestras and ensembles including the Oslo Philharmonic Orchestra and Collegium Musicum.

Karlsens early compositions are traditional, whereas the tonality and treatment of dissonance in his more recent works show that he has moved closer to contemporary currents without relinquishing traditional musical elements. To date he has written 5 symphonies, 4 oratorios, cantatas, concertos and chamber music, as well as church music for choir, soloists and organ.

Inger-Lise Ulsrud is Professor of organ studies at the Norwegian Academy of Music and regularly gives master classes in improvisation. Currently she is also head organist at the Uranienborg Church in Oslo. Ulsrud has made many radio, TV and CD recordings, including a highly regarded album made for Simax of early organ works by Olivier Messiaen (PSC1170).

Since the age of 11 the cellist Frida Fredrikke Waaler Wærvågen has won several prices and scholarships including 'Young Musician' in Tallinn, Antonio Janigro International Cello Competition in Porec, Arve Tellefsen Music Prize, and the RWE Dea Music Scholarship. She has also made her mark as a soloist with orchestras including the Oslo Philharmonic, Munich Radio and Zurich Chamber Orchestras.