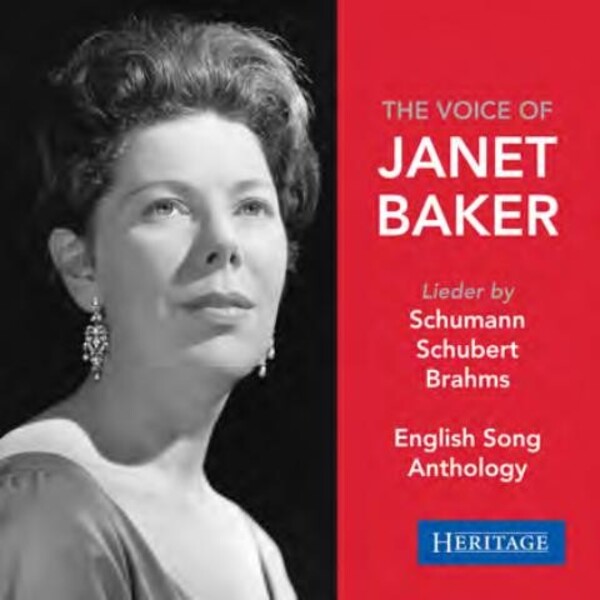 The Voice of Janet Baker

The Cloths of Heaven, op.30 no.3
To the Queen of Heaven

I will go with my father a-ploughing
Sleep

A thanksgiving
Her song

The Cloths of Heaven, op.30 no.3
To the Queen of Heaven

I will go with my father a-ploughing
Sleep

A thanksgiving
Her song

Through her many recordings, Dame Janet Bakers voice has been a constant presence in the lives of millions of people, so it is amazing to contemplate that she last sang in opera at Glyndebourne in 1982 and retired altogether in 1989, aged only 56.

These two compact discs take us back to the beginning of her recording career, when she was in her late 20s and early 30s but already an experienced, accomplished singer.

Two recordings for the SAGA label were made in the early 1960s, both of which feature here. The most important is perhaps the LP of English songs since she never returned to any of them on record. The lieder recital abounds with beautiful technique and tone.

The two SAGA recordings are supplemented by a 1960 recital she made for the BBC Third Programme with Ernest Lush.

"Her reading of the Schumann cycle is one of radiance but also depth, the steady unfolding of heartfelt love. It is one of the great Frauenliebes on disc... this is a record of glorious lieder singing, beautifully accompanied with a warm-toned piano." - Music-Web International

"This Baker collection was and remains iconic...Her tone is honey itself and if meticulous attention to the shaping and articulation of the words can now at times sound precious Bakers musicality and intelligence carry the day." - Music-Web International

CD 2
VAUGHAN WILLIAMS: The Call, Youth and Love
IRELAND: A Thanksgiving, Her Song
HEAD: A Piper
GIBBS: This is a Sacred City (By a Bierside), Love is a Sickness, Op.44/1
DUNHILL: The Cloths of Heaven, Op.30/3
WARLOCK: Balulalow, Youth
HOWELLS: King David, Come Sing and Dance
GURNEY: Sleep, I Will Go with My Father a-ploughing
DUNHILL: To the Queen of heaven
FINZI: Come away, come away, death, It was a lover and his lass (both from Let us garlands bring, Op.18, 1942)
1963 SAGA