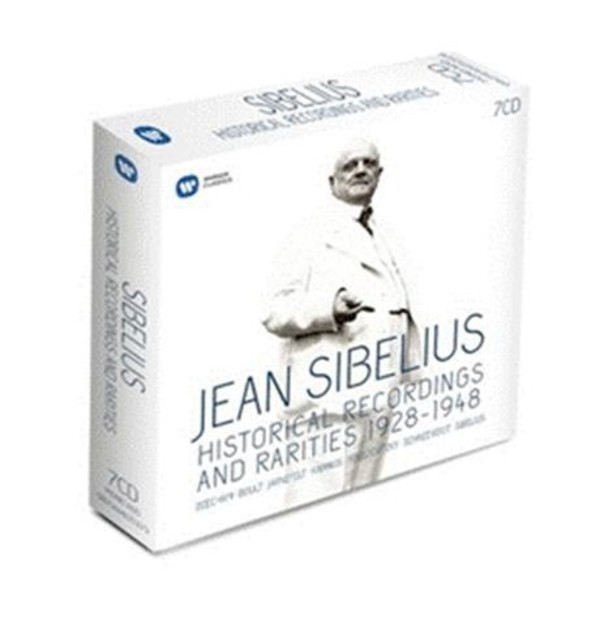 Dating from the years between 1928 and 1948, the recordings in this collection were all made during the lifetime of Jean Sibelius (1865-1957). They can be credited with playing a substantial role in propagating his works around the world and in cementing his international reputation as one of the towering figures of 20th century music.

The seven CDs constitute a wide-ranging survey of the composers music. Rightly, the seven symphonies are at the heart of the collection. Symphonies Nos 1, 2, 3 and 5 are conducted by the Finn Robert Kajanus, whom Sibelius described in 1934 as the best conductor my music ever had  he worked and studied and sought unceasingly to play my works exactly as I wanted them to sound.

Kajanus was Sibelius personal choice for the recordings of symphonies Nos 1 and 2, made in London in 1930 with the Orchestra of the Royal Philharmonic Society, and which were followed by the recordings of Nos 3 and 5 in 1932.

Symphony No.4 is conducted by Sir Thomas Beecham (with the London Philharmonic Orchestra in 1937), while Symphony No.7 is conducted by Serge Koussevitzky (a live recording with the BBC Symphony in London 1933). After Kajanus died in 1933, Sibelius said: Of the men who play my music today, and whose performances I have heard, I prefer Beecham and Koussevitzky. Of Koussevitzky I have heard only the Seventh Symphony records published by the Sibelius Society, but with those I am entirely delighted. Beechams performances have come to me by wireless [radio], and they are superb. He is a remarkable man. It gives me the deepest pleasure and satisfaction to see how great an interest he takes in my music and to know that it is he who is playing so much of music to the British public.

Both Beecham and Koussevitzky were powerful advocates of the composers music  Beecham in the UK and on his international tours, Koussevitzky in the US as chief conductor of the Boston Symphony Orchestra, a post he held for 25 years.

Symphony No.6 is conducted by Georg Schneevoigt  a Finn and a close friend of Sibelius, who also leads the performance of the tone poem Luonnotar, which features the soprano Helmi Liukkonen. Drawing like the majority of Sibelius tone poems on the Finnish national epic, the Kalevala, it is a stunning piece that describes the creation of the world.

In addition to these works, this box offers much more of the essential Sibelius: the Violin Concerto, to which Jascha Heifetz (conducted by Beecham) brings his characteristic fusion of fire and ice; eight more of the tone poems, including Finlandia, which famously gave expression to Finlands defiance of Russian domination at the time of its composition (1899); movements from the Karelia Suite; Valse Triste and extracts from his music for Maeterlincks play Pelléas et Mélisande.

Complementing these are a number of lesser-known works, such as the incidental music to Hjalmar Procopés play Belshazzars Feast, the string quartet 'Voces intimae', and several small-scale pieces for piano, violin, cello and voice.