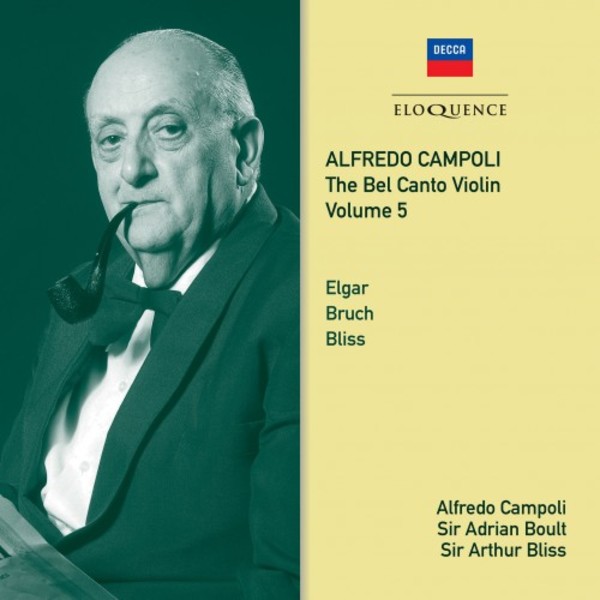 Theme and Cadenza for violin and orchestra, F120
Violin Concerto

Violin Concerto in B minor, op.61

Theme and Cadenza for violin and orchestra, F120
Violin Concerto

Violin Concerto in B minor, op.61

One of the most significant violinists in gramophone history, Alfredo Campoli enjoyed tremendous success in the 1930s as a purveyor of light music, both in concerts with his own salon orchestra and on Decca. A series of six 2-CD reissues from Eloquence focuses on the violinists postwar reinvention of himself as Campoli, the classical soloist.

Edward Elgar dedicated his Violin Concerto to Fritz Kreisler, and Campoli was the outstanding inheritor of Kreislers mantle as a violinist of unchallenged technique and a popular touch that endeared him to audiences of all backgrounds. His October 1954 recording of the concerto is lent further distinction by the support of that supreme Elgarian, Sir Adrian Boult, who also accompanies him in a May 1958 account of the Scottish Fantasia of Max Bruch.

Despite his name and his Roman heritage, Campoli was a Londoner through and through who spoke with a Balham accent. Something of his dry humour and outgoing personality can be heard reflected in the 1955 Violin Concerto written for him by Sir Arthur Bliss, who had become Master of the Queens Music two years earlier. Having worked closely on the solo part together, composer and soloist made this recording together within weeks of its premiere. The result has an unrivalled authority, as fellow composer Humphrey Searle recognized in The Gramophone Record Review of June 1956: Campoli copes with the very difficult solo part as if it were childs play. The concerto is coupled, as it was on the original Decca LP, with the more Romantically yearning Theme and Cadenza which Bliss extracted from the incidental music he had written in 1946 for a radio play concerning a young composer who writes a concerto for his wife as a wedding gift.

All the recordings in this series of Alfredo Campoli: The Bel Canto Violin have been given new remasterings from original Decca sources. Invaluable context on both artist and repertoire is provided by new booklet essays from Campolis biographer David Tunley.

Campoli has successfully renovated this imposing Edwardian piece without destroying its essential contours; he brings new life to it without seeking to stamp out the old... He is well supported by the orchestra, and safe in the hands of Boult.  Gramophone, April 1955 (Elgar)