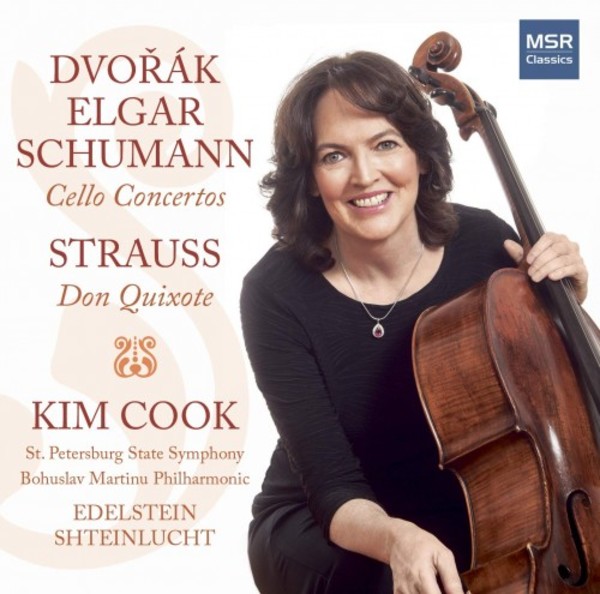 American cellist Kim Cook has performed to critical acclaim as a soloist throughout the United States, in Australia, and in 28 countries in Europe, Asia, the Middle East and Latin America, where she toured as International Artistic Ambassador for the United States Department of State. Cook has received rave reviews for her many recordings, including concertos by Antonín Dvořák, Joseph Haydn, Peter Ilyich Tchaikovsky, Dmitri Shostakovich, Camille Saint-Saëns and Édouard Lalo; and solo sonatas by Zoltán Kodály, George Crumb and Paul Hindemith. Her solo recitals at Carnegie Hall and Londons Wigmore Hall were enthusiastically reviewed. She has performed recitals in New York, Baltimore and at the University of Cambridge, and given concerto performances with the Splitski Virtuozi chamber orchestra in Croatia, Volgograd Symphony Orchestra in Russia and Ukrainian State Symphony Orchestra in Kiev. Her performances have been broadcast on radio and television in Brazil, China and throughout United States. A native of Nebraska and a graduate of Yale University and the University of Illinois, Cook studied with Gabriel Magyar, Aldo Parisot, Alan Harris and Janos Starker. She was principal cellist of the São Paulo Symphony Orchestra, and taught at New Mexico State University prior to her appointment at Pennsylvania State University, where she is Distinguished Professor of Cello. Cook performs on a cello made by Luigi Galimberti (1888-1957) of Milan.

A native of Argentina, Gerardo Edelstein has conducted orchestras and choirs in concerts and ballet and opera productions in Europe, Asia, South America and the United States. Critics and audiences have hailed his performances as powerful, profound and exciting. Edelstein has guest conducted the San Antonio Symphony Orchestra, Kalamazoo Symphony Orchestra, Israel Sinfonietta, Bohuslav Martinu Philharmonic Orchestra, Kharkov Philharmonic Orchestra in Ukraine, Tucuman and Mendoza Symphony Orchestras in Argentina, and at festivals in Dublin, Bordeaux, Zaragoza, Jerusalem, Istanbul and in the United States. He performed with the Penn State Philharmonic Orchestra at Carnegie Hall, the Kimmel Center in Philadelphia and Heinz Hall in Pittsburgh. Edelstein earned music degrees from the National Conservatory of Music in Buenos Aires, Jerusalem Rubin Academy and Rice University. He was associate conductor and music advisor for the Richmond Symphony Orchestra prior to his current position as director of orchestral studies at Penn State University. In addition, Edelstein is artistic director of Penns Woods Music Festival, and music director-conductor of the Williamsport Symphony Orchestra.

Having an extensive operatic and concert repertoire, Arkady Shteinlucht has conducted in the theaters of Minsk, Kharkov, Kazan and Novosibirsk, and in concert halls in Berlin, Hamburg, Stockholm, Basel, Odessa, Ekaterinburg, Tbilisi, Riga, Tokyo and Seoul. Born in Leningrad, Shteinlucht graduated from the Lyceum School and the Leningrad Conservatory, where he studied with professors Mikhailov, Rabinovich and Dmitriev. He has worked as a choirmaster in the St Petersburg State Academic Chapel (Capella), conductor of the Perm Opera and Ballet Theatre and since 1989 has directed the St. Petersburg Mozarteum chamber orchestra. Currently, Shteinlucht is the conductor of the Zazerkalie Childrens Musical Theater in St. Petersburg and is artistic director of the St. Petersburg State Conservatory Orchestra.

"Kim Cook does it again! The Nebraska native, Distinguished Professor of Cello at Pennsylvania State University, and world traveler shows us why each of her new releases on MSR Classics is a keenly anticipated event. With the assistance of two outstanding orchestras from Russia and the Czech Republic, she puts across four of the greatest beauties from the repertoire by Elgar, Strauss, Dvořák and Schumann. In these works the inner beauty of her instrument shines forth irresistibly." - Phil Muse, Atlanta Audio Society, January 2019