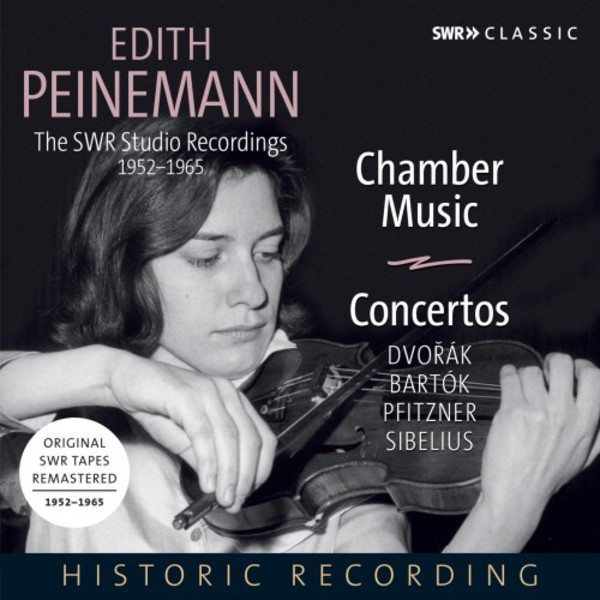 Violin Concerto in A minor, op.53

Violin Sonata in A major

Violin Concerto in B minor, op.34

Suite in A minor for violin and piano, op.103a

Violin Concerto in A minor, op.53

Violin Sonata in A major

Violin Concerto in B minor, op.34

Suite in A minor for violin and piano, op.103a

This 5-CD box set presents the SWR studio recordings of violinist Edith Peinemann in more or less chronological order. Peinemann began recording at the age of 15, first with her father Robert Peinemann in Mainz, later with the pianists Heinrich Baumgartner and Helmuth Barth, as well as with the SWR full-time pianist Maria Bergmann in Baden-Baden. Peinemann uses different instruments on these recordings, including a violin made by Fieker in Klingenthal and an instrument made by the London violin maker Daniel Parker that dates from around 1720. From 1965 onwards she played exclusively on a 1732 Guarneri del Gesù.

These early studio recordings by the great violinist Edith Peinemann are being released here for the first time physically.

The box set contains both chamber music and performances of the violin concertos by Dvořák, Bartók, Pfitzner and Sibelius, which Edith Peinemann performed many times worldwide.

The recording of Pfitzner's Violin Concerto, conducted by Hans Rosbaud, was made on 21 December 1962, just a few days after a live performance in Baden-Baden with the Südwestfunk-Sinfonieorchester. Rosbaud died a few days later, making this his last performance, and his final recording.
Recorded 1952-1965