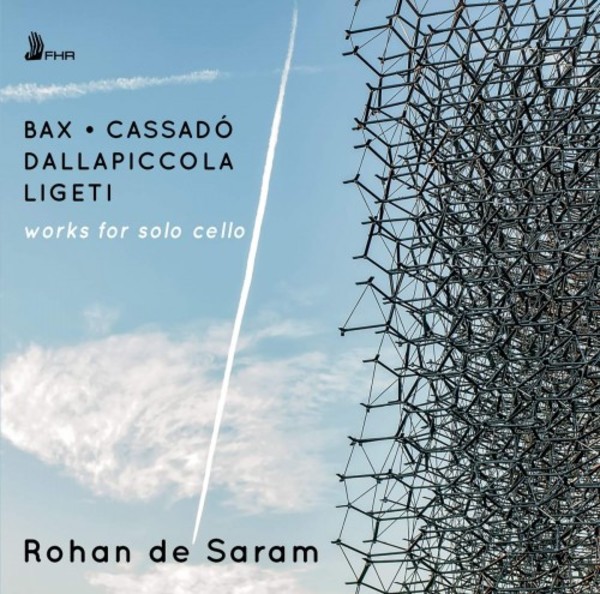 Virtuoso cellist Rohan de Sarams new album features four works which have come to the forefront of repertoire for solo cello from the modern era: Arnold Baxs Rhapsodic Ballad is his only solo piece for this instrument. Likely the most often performed of his earlier works, Ligetis Sonata for Solo Cello has for over a decade been used as a test piece for the Rostropovich Competition in Paris. Dallapiccolas composition was written for the Spanish cellist Gaspar Cassadó. It is a substantial, powerful work, and an early serial composition of the composer, full of colourful effects and humour.

Rohan de Saram gave the UK premiere of Arnold Baxs Rhapsodic Ballade in 1967 and the first public performance of György Ligetis Sonata for Solo Cello in 1979. From the age of twelve, Gaspar Cassadó was de Sarams main cello teacher. De Saram met Luigi Dallapiccola several times when he came to Cassadós home in Florence specifically to work on Ciaccona, Intermezzo and Adagio.

Rohan de Saram received the Suggia Award at the age of 16 which enabled him to study with Pablo Casals in Puerto Rico and with John Barbirolli in London. Casals said of him: There are few of his generation that have such gifts. As a soloist he has played throughout Europe, Asia, Australia, New Zealand, the USA, Canada and the former Soviet Union with the major orchestras and leading conductors of the world such as John Barbirolli, Adrian Boult, Colin Davis, Zubin Mehta, Seiji Ozawa and Malcolm Sargent. His debut appearance in the USA was with the New York Philharmonic Orchestra at Carnegie Hall at the invitation of Dmitri Mitropoulos. Among the composers he worked with at that time were Kodály, Shostakovich, Poulenc and Walton. After a recital in America, Piatigorsky presented him with a special bow which he uses for concerts.

De Saram is an outstanding interpreter of contemporary music and has worked personally with many leading contemporary composers. One of the first was Iannis Xenakis whose Kottos for solo cello was given its UK premiere by de Saram. He had also worked with György Ligeti, giving the premiere of his solo Cello Sonata; with Henri Pousseur, giving the world premiere of Racine 19, a work based on a 19-note scale and dedicated to him; and with Luciano Berio, giving the UK premiere of his work for cello and orchestra, Il ritorno degli Snovidenia.