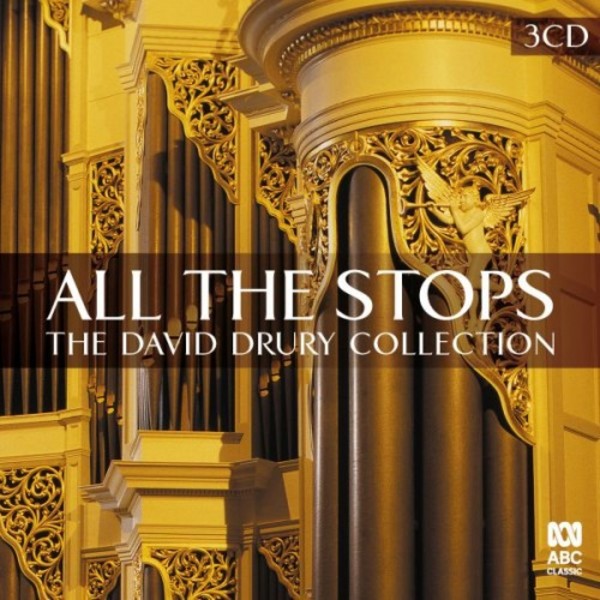 All the Stops: The David Drury Collection

Toccata in B minor

A Song of Sunshine
A Trumpet Minuet

Toccata in B minor

A Song of Sunshine
A Trumpet Minuet

When the mighty Sydney Town Hall Organ, one of the wonders of the musical world, emerged from 12 solid years of repairs and refurbishment in the mid 1980s, the organist chosen to capture its magnificence on disc for the first time was the Australian virtuoso David Drury.

This 3-CD set begins with that extraordinary recording, made to celebrate the centenary of this unique and glorious instrument: built by William Hill in 1890, the biggest and best-preserved 19th-century Romantic organ in the world.

Drurys flawless technique is coupled with an extraordinary sensitivity to the vast range of tonal colours available on its 8,756 pipes, which range in size from barely 10cm  no bigger than a ball-point pen  to a record-breaking 64 foot (19 metre) Contra-Trombone stop. There is music of whisper-light delicacy and music of earth-shaking grandeur, and every possible shade and timbre in between.

A second disc, released in 1993 and included as CD2 of this collection, continues this magical pairing of master-organist and world-renowned instrument, while extensive liner notes trace the organs fascinating history.

Disc 3 takes us to Melbourne, where Drury explores the power and the subtlety of another splendid instrument: the T.C. Lewis organ in St Pauls Cathedral. Across all three discs, Drury offers a dazzling range of repertoire, from monumental organ works by Reger and Liszt to orchestral classics by Bach, Elgar, Saint-Saëns and Wagner, brilliantly arranged for the king of instruments. This collection also features thrilling improvisations by Drury himself - the only Australian ever to win the prestigious Tournemire Prize for improvisation.
CD 1
Music for a Grand Organ

CD 3
On a Grand Scale