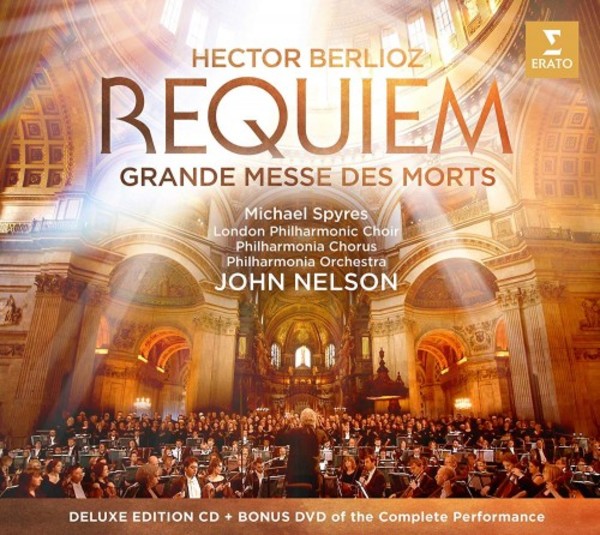 Marking the 150th anniversary of Berliozs death, this performance of the mighty Requiem or Grande Messe des Morts  presented on both DVD and CD  took place in St Pauls Cathedral, London, in March 2019.  Conducted by John Nelson, it involved over 300 musicians, including tenor Michael Spyres.  As Nelson said: Every measure resonates deeply with me and I feel there is sincerity, even in the great moments of bombast.
The surpassing virtue of this performance  was that both aspects, the spine-shakingly spectacular and the heart-rendingly haunting, were allowed to make their impact.  The Times

What an extraordinary work is Berliozs Grande Messe des morts! Composed in 1837  just ten years after the death of Beethoven  it is a daring exploration of the themes of pain, loss and consolation, but also of sonority, texture and space (both musical and physical), that could only have come from the pen of the iconoclastic young Frenchman. Despite the scale of forces involved (at least 400 musicians and singers are required, including 100 strings, ten timpanists and four spatially separated brass choirs), this huge work has fared impressively on disc, going back at least sixty years to the days of Munch and Beecham. Only last October we welcomed two impressive new recordings, from Bergen forces under Edward Gardner on Chandos, and from Seattle forces under Ludovic Morlot on the Seattle Symphonys own label.

Now, in Berlioz Year itself, comes along a very special new account on Erato conducted by John Nelson, the doyen of present-day Berlioz conductors, whose 2017 recording of Les Troyens with a stellar cast won universal praise and was one of our discs of the year. Recorded in St Pauls Cathedral, London, on 8 March 2019, the 150th anniversary itself of Berliozs death, it features an enlarged Philharmonia Orchestra, plus the combined forces of the London Philharmonic Choir and the Philharmonia Chorus. And what glorious sounds they make - this is a performance which, from the very outset, draws the listener in with its superb dynamic shaping, textural richness, expressive commitment and sheer sense of scale and space.

St Pauls Cathedral is notoriously difficult for performers and recording engineers, but here the recording team have worked wonders in preserving focus while capturing the unique warmth and resonance of the space. Whether in the opening Requiem aeternam, the vast eruptions of sound in the Tuba mirum or the brilliant dynamic contrasts of the Rex tremendae, the cathedrals acoustics  comparable to those of Saint-Louis des Invalides in Paris where the first performance took place in December 1837  play a crucial and dynamic part in the works impact, now prolonging harmonies to heavenly lengths, now blending them to startling effect. Few other acoustics can accommodate so generously the thunderous outbursts of pain in the Lacrymosa, and the choir sing their socks off throughout. But it is not just in the larger-scale passages that this account succeeds: the a capella delicacy of the Quaerens me is lovingly shaped and sustained, with just a hint of strain in the highest soprano register that is easily accepted as part of a live performance, while the solemn unison into nations of the Domine Jesu Christe blossom out gloriously in its closing phrases.

The startling opposition of sonorities in the Hostias can rarely have sounded so bold as it does here, the wind voicing in particular absolutely spot-on. And surely no tenor today is better qualified to sing the solo part in the Sanctus than Michael Spyres, his performance as Aeneas in that award-winning Les Troyens still fresh in the memory. Here, at last, is a performance of this music to set alongside that of Léopold Simoneau for Munch in 1959, supple, expressive, and fully equal to the demands Berlioz places on the voice. As the performance reaches full circle with the closing Agnus Dei and those touching final Amens, the listener is aware of having been on a unique emotional, spiritual and musical journey, beautiful and strange, wild, convulsive and sorrowful, to quote Albert de Vigny writing of the Requiems first performance.

Were it a CD performance alone, this new recording would immediately take its place at the top of the current catalogue, competitively priced and attractively presented. Yet the astonishing thing is that it comes with a DVD of the complete performance as well! This is more than just the icing on the cake: with some lively camera-work, the viewer experiences close-ups of the singers and players, distance shots of the whole ensemble including some staggering aerial views, the row of timpanists ranged behind the orchestra and in front of the vast choir like so many sentinels, and (of course) wonderful perspectives on Wrens architecture, the cathedrals art-work and statuary. Best of all, though, is the sight of Nelson himself, a benign figure fully yet gently in command of his forces, resolute in his direction and pacing, and obviously appreciative of the sounds he coaxes from the entire ensemble. St Pauls, the resting place of one Nelson, becomes the scene of serene triumph for another, and a lasting tribute to the genius of Berlioz. If youve ever wondered at his place among the greatest composers, or at his Requiems inclusion among the great choral masterpieces, this performance reveals why.