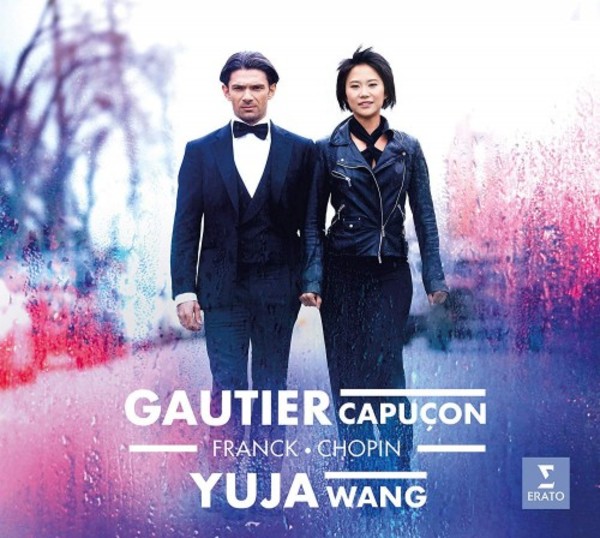 Violin Sonata in A major (arr. Delsart for cello)

Violin Sonata in A major (arr. Delsart for cello)

Finesse and fire from a starry musical duo  A recital that showcased the very best in collaborative music-making, was how the Toronto Star described the concert at Koerner Hall in Toronto that formed the basis for this recording.

It was part of an extensive North American tour made in Spring 2019 by cellist Gautier Capuçon and pianist Yuja Wang, who established their musical partnership several years ago, notably consolidating it with performances at the Verbier Festival in Switzerland. [They] had worked their interpretations into perfect unity, continued the Toronto Star. They both possess remarkable technique: Wang with her seemingly impossible legato runs and fingers that endlessly spin the most luxurious of musical silk; Capuçon with his graceful phrasing supported by seemingly infinite gradations of bow control.

When their tour took them to Boston, The Classical Review observed that Capuçon and Wang share a similar vigor and alert spontaneity that make it seem as if they are finishing each others phrases. The French cellist plays with a robust intensity that brings out drama from even the most delicate of works ... Wang proved a subtle and thoughtful partner  It seemed that the two had been playing together for a lifetime.

The programme for the album comprises two works by Chopin, his Sonata in A major and his Polonaise brillante in C major, and Francks Sonata in A major, a transcription by the 19th-century cellist Jules Delsart of the Belgian composers glorious violin sonata.

The two sonatas, very different in character, gave the duo an excuse to explore the softer side of virtuosity, observed the Toronto Star. Together, they frequently made the music whisper without losing any of its engaging tone. The pianissimo playing drew our attention into a rapt, tight circle around the stage lights.

The sheer excitement generated by the duos music-making was captured in The Philadelphia Inquirers report after Wang and Capuçon appeared in the City of Brotherly Love: As battles of the titans go, the  recital was a rare thrill. Capuçon has a gorgeously complex sound in the low, quiet parts of his voice. He is refined and so smoothly nimble you never sense a drop of struggle The term accompanist has never done a very good job of describing the relationship between pianist and instrumentalist in any piece. But as essentially a keyboard composer, Chopin brought absolute egalitarianism to the party, and a party it was ... Wang  a star locally since her Curtis days [Curtis Institute, Philadelphias prestigious conservatory] and a superstar everywhere else since  is a pianist worth hearing because of her strong personality, and it was there in abundance. In the Chopin Cello Sonata, Opus 65, she found ideas and musical lines to underscore in boldface. So excitable was the last movement you felt you were in the throes of some weather phenomenon. She digs into moments of arrival, releasing a deep sense of satisfaction  Chopins Introduction and Polonaise brillante  was pure adrenaline.