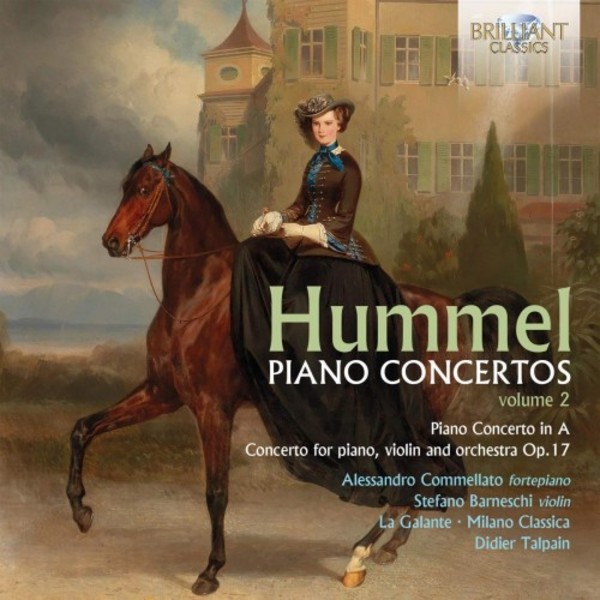 Concerto in G major for piano and violin, op.17
Piano Concerto in A major

Concerto in G major for piano and violin, op.17
Piano Concerto in A major

This collection is the second volume in a series of Hummel piano concertos (after Vol.1, 94338), bringing much-needed attention to one of the most respected composer-pianists of the 18th century.

A friend of Beethoven and Schubert, Johann Nepomuk Hummel (17781837) is a staple of the Classical and early romantic repertoire. Hummel went to live with Mozart, who singled him out as a child prodigy, took him on as his pupil and sponsored Hummels first concert appearance at the age of nine. Though Mozart died four years later, Hummels music retained a distinctly Mozartian flavour. This album opens with the Concerto for piano and orchestra in A, WoO24a S.5, a work that languished in obscurity and was only rediscovered in the 1960s. It sounds remarkably similar to Mozarts Clarinet Concerto, K622, with the first movement even written in the same key of A major.

The second half of this release is given over to the Concerto for piano, violin and orchestra, op.17  an instrumental combination few composers have attempted. The soloists alternate between dialogue and unison, each with their own complex rhythmic patterns. The cadenza at the end is a new addition composed by Alessandro Commellato. Staying true to Hummels style, he showcases the janissary (or Turkish) style of playing facilitated by the pedalboard, typical of early 19th century Viennese pianos such as the 1825 Böhm instrument used on this recording.

A virtuoso pianist as well as composer, Hummels keyboard writing is highly technical with fast step-wise movement, and every melody is decorated with detailed ornamentation, a challenge for even the most advanced pianists today. In this recording however, the listener is in safe hands as Alessandro Commellato, joined by violinist Stefano Barneschi and ensembles Milano Classica and La Galante, approaches the programme with grace and precision. They are conducted by Didier Talpain, a specialist in the performance of Hummels works who has already recorded a number of his compositions for Brilliant Classics and pioneered an effort to revive his opera Mathilde de Guise.

Brought to you by Hummel specialists, two volumes of a wider movement to ensure that this composers legacy is not forgotten, rather that his music is recognised as the work of a genius and that he may take his rightful place on the shelf alongside Beethoven, Mozart, Chopin and Schubert.