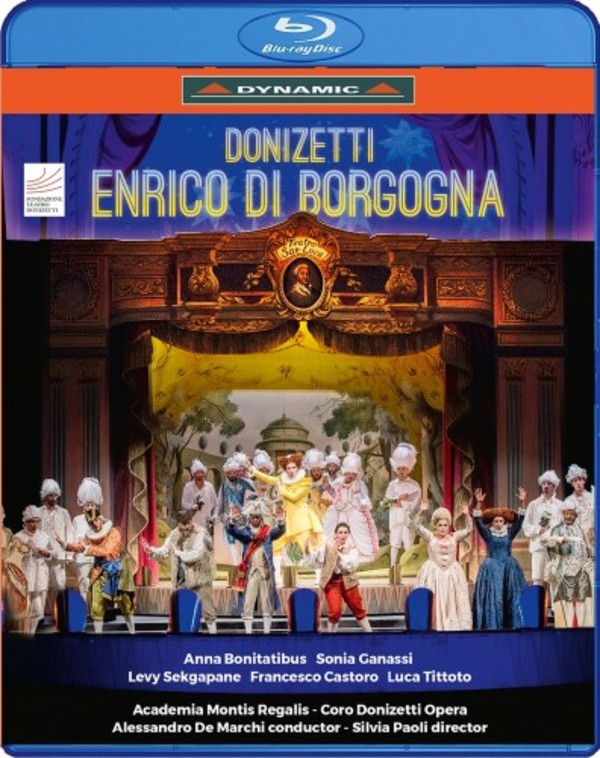 Enrico di Borgogna is a melodramma per musica that was premiered in Venice in 1818, marking Donizettis stage debut. The plot of this rarely performed opera follows a rather traditional scheme: Enrico wants to defeat the son of the villain who usurped his fathers throne and is about to marry his beloved Elisa. Fortunately, he succeeds in stopping the marriage and regaining his inheritance.

This release is a world première video recording of the 2018 Donizetti Opera Festival performance, which received excellent reviews for its brilliant staging. Director Silvia Paoli uses a theatre within the theatre approach which produces moments of sheer humour and amusement and, as the curtain opens, the public is transported back to the time of the opera's première.

This was  a genuinely funny presentation, which had the audience laughing out loud. Everything was treated as a source of fun, from the narrative and its mix of characters through to the theatrical conventions of the time, even poking fun at the singers themselves. It was all staged in a blaze of colour, fast-moving action, fabulous costumes and cleverly managed extraneous silliness.  Operawire

[Anna Bonitatibus] displayed a burnished, deep timbre, sparkling coloratura and wonderful phrasing, confirming her status as the most interesting mezzo of her generation.  Bachtrack

Sonia Ganassi  has a strong, dynamically versatile and flexible voice which she is able to manage intelligently and with skill.  Operawire