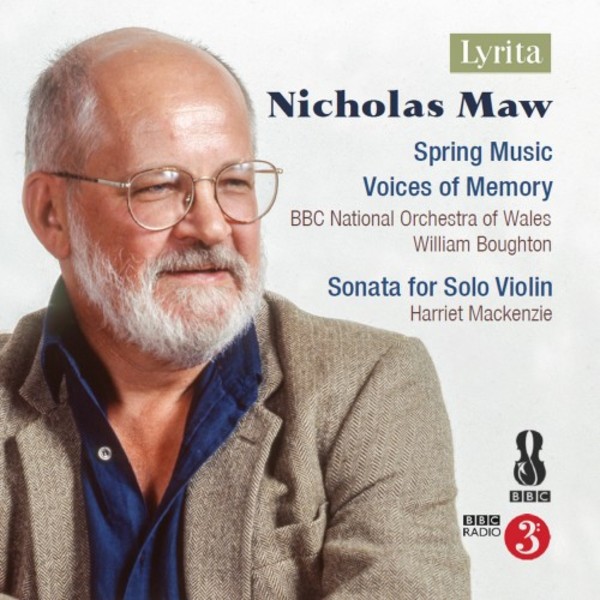 Nicholas Maws most fervent desire was to communicate directly with his audiences and produce material which performers would enjoy playing and Spring Music, written with the express purpose of diverting and entertaining an audience, finds the composer at his most uninhibited and freely expressive. Fresh, colourful and vibrant, this score has the exotic, open-hearted spirit of a curtain-raiser by William Walton or Alan Rawsthorne. In its final, slimmed-down version, it rapidly became one of Maws favourite pieces among his own output and he once described the long-breathed cello-led melody as one of the best tunes I think Ive actually ever written.

In 1995 Maw was commissioned by the BBC to write a work commemorating the 300th anniversary that year of the death of Purcell. Maw soon came to the conclusion that he wanted to round off his tribute piece with an example of a chaconne, a form in which Purcell was pre-eminent. The theme which Maw chose to embellish is derived from the first of his Life Studies for 15 solo strings. Taking his lead from Tchaikovsky, Maw decided that the main title should reflect precisely the reference vocabulary of the piece and so the piece became known for a while as Romantic Variations. Later still the title was altered to its definitive form of Voices of Memory: Variations for Orchestra.

Described by Andrew Burn as a major contribution to the genre, the Sonata for Solo Violin was requested by Jorja Fleezanis, to whom the work is dedicated. In Maws Sonata for Solo Violin, the constraints of writing for a single stringed instrument in a four-movement, large-scale work are deftly surmounted by the composers gift for melodic lines and rhythmic invention. Each movement has a vivid sense of colour, formal logic and onward momentum so that the writing, however demanding it may be, never suggests an arid study or a shallow technical exercise.

This is a terrific disc. It is a little over 10 years since the death of Nicholas Maw (1935-2009), one of the most gifted post-war British composers.  Voices of Memory (1995) is one of the hidden gems in Maws output, a variation set written to celebrate the tercentenary of Purcells death. The sheer brilliance of the compositional ingenuity (on a theme from his own Life Studies rather than Purcell) and acuity of orchestration should place it in every British orchestras repertoire, as this coruscating performance under William Boughton trumpets loud and clear.  Guy Rickards
Gramophone May 2020