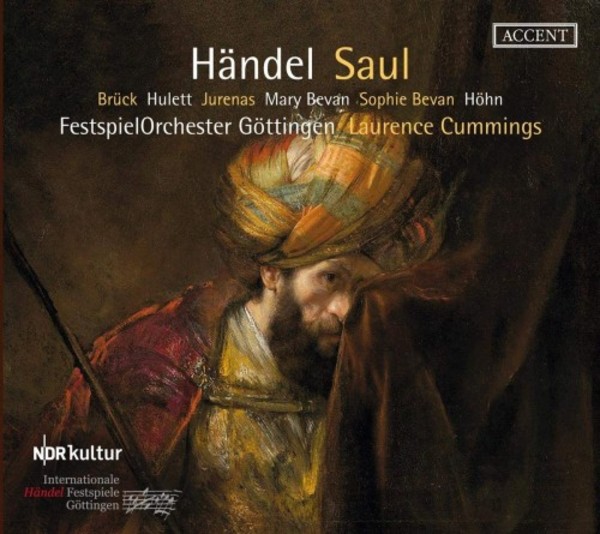 Soloists Markus Brück, Benjamin Hulett, Eric Jurenas, Mary and Sophie Bevan, and Raphael Höhn are accompanied by the NDR Chor, the FestspielOrchester Göttingen and Laurence Cummings in this highly revered performance from 2019 of George Frideric Handels great oratorio, Saul.
David returns from the battle bearing the head of the giant Goliath and as a reward, King Saul promises him the hand of his horrified daughter, Merab. But when David received more popular acclaim than the King, Saul is consumed by jealousy. His daughter Michal advises David to soothe the incensed monarch with the calming strains of a harp, but Sauls rage is merely exacerbated and he finally casts a spear at David. When he misses, Saul orders his son Jonathan to slay David...
When setting this Old Testament material to music in 1738, Geroge Frideric Handel worked together for the first time with the librettist Charles Jennens who later on also put together the text for Messiah. This work was premiered on 16 January 1739 at the Kings Theatre in the Haymarket, London.
Markus Brück sings all major roles at his home theatre, the German Opera House in Berlin, where he was appointed Chamber Singer in 2011. Benjamin Hulett trained as a choral scholar at New College, Oxford and the Guildhall School of Music and Drama.
Eric Jurenas, winner of prizes at numerous competitions, including Antonio Cesti and Concours Corneille, since graduating from the Juilliard School in 2015 has established himself as one of the most sought-after countertenors of his generation. Laurence Cummings is one of Britains most exciting and versatile exponents of historical performance, both as conductor and harpsichord player. He has been Musical Director of the London Handel Festival since 1999 and Artistic Director of the Göttingen International Handel Festival since 2012. Highly recommended.
Live recording from the Göttingen International Handel Festival, 18 May 2019
Cast:
- Saul: Markus Brück (baritone)
- Jonathan: Benjamin Hulett (tenor)
- David: Eric Jurenas (countertenor)
- Michal: Mary Bevan (soprano)
- Merab: Sophie Bevan (soprano)
- High Priest, Witch: Raphael Höhn (tenor)