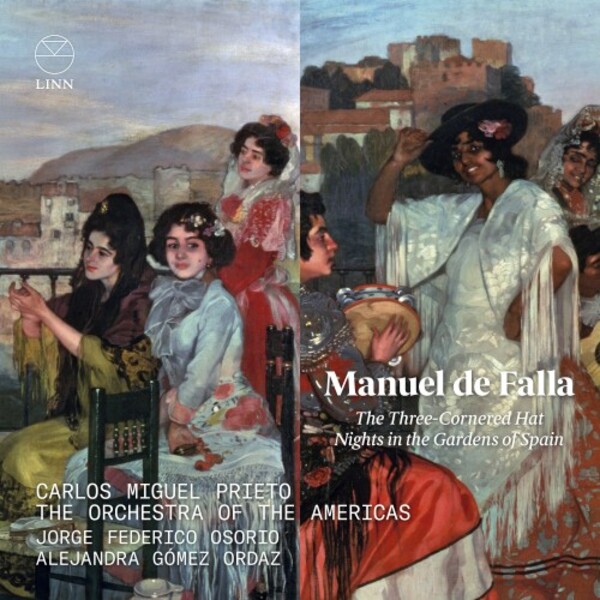 Falla - The Three-Cornered Hat, Nights in the Gardens of Spain

Following its acclaimed Linn debut recording, Copland & Chávez: Pan-American Reflections, The Orchestra of the Americas releases its sophomore album with Carlos Miguel Prieto. Prieto is joined by fellow Mexican and celebrated pianist Jorge Federico Osorio, who brings his superb musicianship, powerful technique, vibrant imagination and deep passion to this all-Spanish programme.
Osorio is the soloist in Fallas highly atmospheric piano concerto, Nights in the Gardens of Spain, a set of symphonic impressions which conjures up the enticing sounds and scents of a summers evening. Conductor and pianist received critical acclaim following their performance of this work in Ireland: Prieto elicited a diaphanous palette of colours [and] as Osorios arpeggios shimmered up and down the piano we were magnetically drawn into this highly evocative world full of lush sounds and sensuous possibilities.
Fallas finely crafted masterpiece The Three-Cornered Hat is both vibrant and colourful and showcases the superb precision of The Orchestra of the Americas. The programme is completed by the Interlude & Dance from Fallas La vida breve and the Intermezzo from Granadoss exquisite Goyescas.
Musical Americas 2019 Conductor of the Year, Carlos Miguel Prieto has led acclaimed performances with orchestras throughout the Americas, Europe and beyond. Prieto was The Orchestra of the Americas first Principal Conductor from 2002 until 2011, when he was appointed Music Director.
The Orchestra of the Americas is a world-class symphony orchestra of gifted musical leaders, aged 18 to 30, representing twenty-five nations of the western hemisphere. The orchestra has performed more than 400 concerts since its 2002 inaugural tour.
Pianist Jorge Federico Osorio is the recipient of several international prizes and awards, including the prestigious Medalla Bellas Artes, the highest honour granted by Mexicos National Institute of Fine Arts.
The Three-Cornered Hat suites intoxicating rhythms are meat and drink for these young players, and they play terrifically. The sultry Nights in the Gardens of Spain, Fallas piano concerto in all but name, falls to veteran Mexican pianist Jorge Federico Osorio, whos in top form, aided by Carlos Miguel Prietos energizing direction.  Apple Music UK

Following their 2019 Linn debut with Pan-American Reflections (symphonies by Copland and Chávez), the youthful Orchestra of the Americas under its Musical Director Carlos Miguel Prieto returns with a disc of distinctly Hispanic flavour. The Orchestra, whose gifted members are drawn from 25 countries in the western hemisphere, are all aged between 18 and 30, with their main work done during a JulyAugust residence. This summers tours are, inevitably, postponed due to the ongoing Covid-19 crisis, but theres a great opportunity to show support for this excellent ensemble by listening to their latest album.

The main works are two of Manuel de Fallas most engagingly evocative scores, starting with the complete ballet version of The Three-Cornered Hat. This started life more modestly as a pantomime entitled The Corregidor and the Millers Wife, based on a novella by Pedro Antonio de Alarcón, before an offer from Sergei Diaghilev, no less, persuaded de Falla to work it up into a full-scale ballet. Under its new title (the same as de Alarcóns novella), the ballet received its premiere at Londons Alhambra Theatre on 22 July 1919 under the baton of Ernest Ansermet, with choreography by Massine and sets by Picasso. It was a rousing success, even though its subsequent Spanish premiere had a more mixed reception. This tale of jealousy, intrigue and mistaken identities has since been recognised as the culmination of de Fallas preoccupation with the folk music of his native Andalusia, in particular the flamenco cante jondo (deep song) in which he felt the soul of Spanish music resided. It also shows the influence of Debussy and Ravel in its masterly scoring for large orchestra including an exotic array of percussion instruments.

Under Carlos Miguel Prieto, the Orchestra of the Americas embraces these various elements with relish, revelling in the overtly Spanish elements (including the collective Oles! of the introduction) while demonstrating impressive finesse and sensitivity in the more lyrical passages. Mezzo-soprano Alejandra Gómez Ordaz brings just the right hint of sensuality to the three numbers calling for a vocal line (Introduction, The Grapes, and the Dance of the Miller). Strings in particular really dig into the rhythms of the Dance of the Millers Wife and the Dance of the Miller himself, while the woodwind and horn sections contribute some excellent solo passages, especially the chirping flutes and piccolo, dreamily plangent cor anglais, and comedic bassoon  the latter associated with the buffo role of the Corregidor (visiting magistrate). Theres a particularly deft evocation of nighttime near the end of movement 5, with the song of a cuckoo disturbing the air before the nocturnal entrance of the magistrate. An almost childlike delight marks out the passages featuring prominent orchestral piano in the latter stages of the Dance of the Corregidor. With a chase involving the Miller, and inevitable comeuppance for the magistrate, the final dance (a rousing jota) is an absolute riot, but Prieto keeps it gently yet firmly under control, and it is as much the moments of gentle poetry that distinguish this thoroughly idiomatic and involving performance.

De Falla termed his perennially popular Nights in the Gardens of Spain symphonic impressions, but it requires the collaboration of an outstandingly sympathetic soloist to get the balance and integration between orchestra and concertante piano just right: this is definitely not a concerto, in spite of the three-movement form. Few today are better qualified for this work than Mexican pianist Jorge Federico Osorio. Even though the recorded balance has the piano somewhat forward (meaning that every detail of de Fallas writing tells), there is a splendid unanimity of purpose and hue to these ravishingly poetic evocations of the gardens of Andalusia. Burnished horns, infectious rhythms and textural transparency all make this one of the most touching accounts of this work currently on disc, by turns rapt and animated, and Osorios technically superb playing is a joy from start to finish. In a work that is even more demanding than The Three-Cornered Hat, this is a performance where the young orchestra, in partnership with experienced conductor and soloist, really proves its worth.

In between these two major items, the orchestra and Prieto turn in an impassioned account of the Intermezzo and Dance from de Fallas La vida breve, and a lovingly shaped Intermezzo from Enrique Granadoss opera Goyescas. All in all, a real peach of a disc. If you cant get to Spain this summer and are in need of some sunshine (or indeed moonlit nights), listening to this excellent release should be some sort of consolation.

you can always escape to sunny Spain with the young and thrusting Orchestra of the Americas, conducted by Carlos Miguel Prieto in Fallas Three-Cornered Hat and Nights in the Gardens of Spain. The recording is deliciously clear, with each instrumental colour sparkling, from castanets to bassoon.
The Times