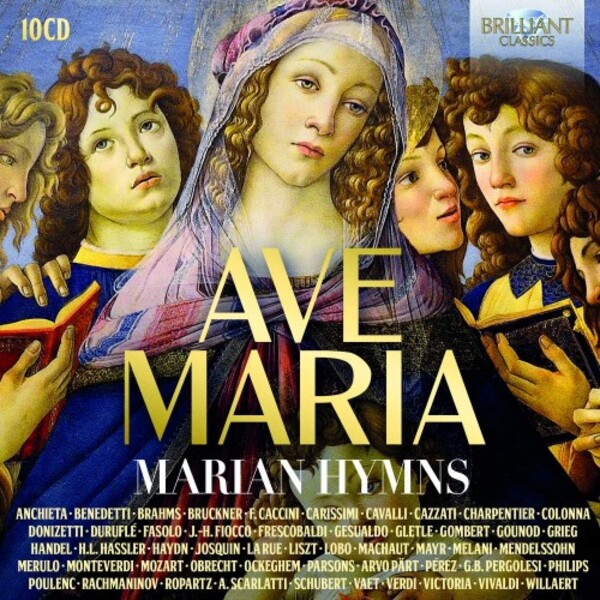 A millennium of Marian motets and antiphons: the most comprehensive collection available of musical prayers to the Virgin.

Mary the Blessed Virgin, mother of Christ, has been an object of devotion in music as well as buildings, words and images since the early stirrings of the Christian church in the first and second centuries AD. The music in this box begins with the chants written down by monks during the papacy of Pope Gregory II, and for centuries these supple, joyful chants were passed on from generation to generation of Christians in worship and adoration.

With the development of polyphony in the 11th century, these Marian devotions took on further richness. Settings of the Ave Maria and other Marian prayers gradually flower and grow further from the original tree of Gregorian chant. This process is outlined in the box like a piece of slow-motion photography, moving from Guillaume de Machaut through to the Dutch polyphonists of the 15th and 16th centuries such as Ockeghem, Obrecht and Nicolas Gombert, but the vernacular traditions of Marian devotion in Italy and Spain are also represented with excerpts from the Laudario di Cortona and Llibre vermell de Montserrat. The edicts of the Council of Trent in 1566 commanded that sacred music communicate the text clearly above all considerations of aesthetic refinement, and composers across Europe accordingly wrote with greater transparency, less counterpoint and more declamation. Nevertheless, the new style inspired masterpieces such as the Ave Maris Stella of Monteverdi and Gesualdos Ave, dulcissima Maria.

With instruments increasingly joining voices in sacred music, Marian hymns adopted a concertato style, and the boundaries between the altar and the stage of the new opera houses became increasingly blurred. Settings of prayers such as the Salve Regina settings by Vivaldi and Pergolesi became multi-movement pieces, like a vocal concerto or dance suite, demanding vocal virtuosity from singers practised in soloistic repertoire. Writing in praise of Mary became less of a commission and increasingly driven by personal faith: Haydn wrote his sublime G minor setting of the Salve Regina having promised to dedicate a work to the Virgin after recovering from a serious illness.

Many Romantic-era settings of Marian poetry are accordingly infused with a quality of sublimated eroticism, like the Renaissance madrigalists, such as the notable examples by Schubert, Gounod and Brahms. Only in the middle of the 20th century did religiously inclined composers including Duruflé and Poulenc return to the chanted origins of prayers such as Tota pulchra es. The collection comes to a radiant, meditative close with the seven Magnificat antiphons by Arvo Pärt, representing the modern revival of religious music in the hands of composers who rebelled against the Modernist revolution.

All the performances in the box are modern, digitally recorded versions by acclaimed ensembles such as the Oxford Camerata, the Corydon Singers, Le Concert Spirituel and the Choir of Kings College, Cambridge. The booklet includes an essay by Peter Quantrill on the history of Marian devotion in music.

Throughout the centuries Christians have invoked the help, mercy and comfort of Maria, Holy Mother of God. In the Catholic liturgy Maria is honoured with several hymns or antiphons: Ave Maria, Salve Regina, Ave Maris Stella. Countless composers have set these texts to music, and this new Brilliant Classics set brings together an astonishing array of Marian Hymns, ranging from medieval Gregorian Chant, the earliest compositions by Machaut, the Flemish polyphonists Josquin, Ockeghem, Obrecht, Willaert, into the high Renaissance of Monteverdi, Frescobaldi, Cavalli, Gesualdo, Caccini, through the Baroque with Vivaldi, Scarlatti, Haydn, Pergolesi, to Mozart, the 19th century Schubert, Mendelssohn, Liszt, Brahms right into the 20th century ending with Poulenc, Duruflé and Arvo Pärt.

Another valuable and inspirational set in the Sacred Music series by Brilliant Classics, previous issues include collections of the Requiem, Stabat Mater and Magnificat.