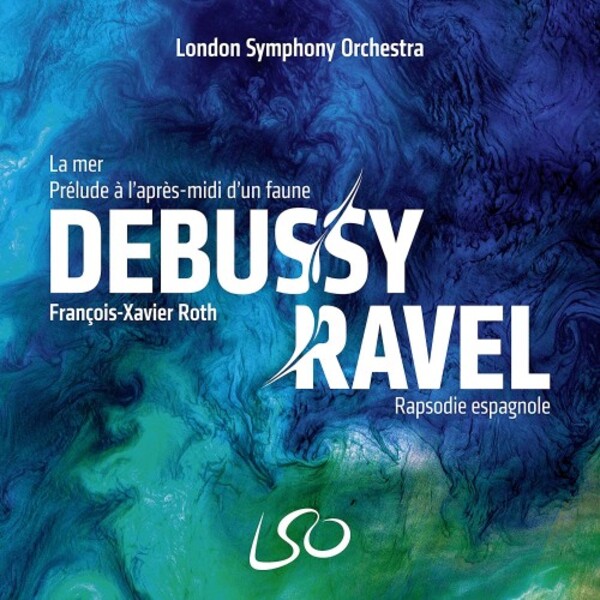 François-Xavier Roth, Principal Guest Conductor of the London Symphony Orchestra, displays his deep affinity with the music of Debussy and Ravel on his latest LSO Live album. A fascination with his Spanish heritage would be a recurring theme in many of Ravel's creations. Mysterious melodies weave delicately throughout his early work Rapsodie espagnole, punctuated by bursts of Spanish-inspired fanfares and Habanera dance rhythms. The voluptuous flute opening of the Prélude à l'après-midi d'un faune immediately conjures a world of luxurious fantasy, weaving through the music's changing scenes with effortless spontaneity. Every instrument adds something unique, and the whole work appears to float free of form and convention. In La Mer, Debussy tells the story of the eternal odyssey of the ocean. He sails through storm and calm, wind and rain, in music that rises and falls with the rhythms of the sea. The score is so vivid that you can almost smell sea salt and see the crests of the waves.

This new release from the LSO Live label contains works by Debussy and Ravel which are already very well-represented in the catalogue, stretching back to the early days of the LP and even beyond. But, with one of todays finest exponents of the French orchestral repertoire at the helm, it turns out that there's plenty still to discover in these three great masterpieces.

The disc opens with what is possibly the quietest beginning to Rapsodie espagnole youre likely to hear. The leitmotivic falling figure first heard on violins and violas doesnt simply start: it emerges, as from nothingness, building to a mere piano before dying back again. Its typical of the fastidious attention to detail and atmosphere that are the hallmarks of Franois-Xavier Roth's musicianship, and in the London Symphony Orchestra (of which he is Principal Guest Conductor) he has ideal partners, responsive to the tiniest details of Ravel's dreamily Iberian score while never fetishising them. From the seductively nocturnal Prélude à la nuit, through the sinewy suggestiveness of the following Malagueña to the threatening bass lines and tentative dance moves of the Habanera, this is a performance that has a sure sense of momentum and line. It culminates in an exceptionally vivid account of the concluding Feria, piccolos and flutes tripping with a Mendelssohnian lightness, brass and percussion adding real swagger, and the central episode with its sensual cor anglais solo and luxuriant string glissandi evoking some night-time tryst before the whirl of the exuberant dance bursts forth again. Its quite a journey from those barely audible opening bars to the heady close, and this is an account that will give your speakers (as well as your toes!) the full work-out, with a huge dynamic as well as expressive range.

The slender centrepiece is Debussys landmark Prélude à laprès-midi d'un faune, a work that Roth surely knows backwards. His recent recording with his own period-instrument orchestra, Les Siècles (coupled with Jeux and the three Nocturnes) was a marvel in itself. Here he recreates that miracle with a modern-instrument band in a performance which, although slightly broader, still flows with consummate ease. Gareth Daviess account of the opening flute solo is exquisitely shaped, soon joined by oboist Timothy Rundle, Chris Richards on clarinet and the wonderfully mellow horn of Bertrand Châtenet. Here it is very much the woodwind and harps that are on show, in a reading that frequently shines new light on this familiar music, with Roth rethinking balance and perspectives, bringing out top lines and inner parts with that little extra highlighting. Yet nothing feels done just for the sake of it: everything contributes to the realisation of the musical poetry in a work whose unspoken narrative can conjure up more immediacy than mere words can convey. Its a masterly performance, infused with the poetry of ancient myth, at once nostalgic and unmistakably modern, and the LSO wind and strings are at the peak of their game.

Finally, we reach the gorgeous expanses of Debussys three symphonic sketches, La Mer. The composers lifelong fascination with the sea resulted in these three dynamic tableaux, evoking the sea awakening; the sea at play; the wild sea. As an orchestral showpiece, La Mer is second to none, requiring technical virtuosity as well as a refined sensibility and sensitivity to what lies between the notes. Its a combination that is tricky to pull off, but the LSO under Roth manage it effortlessly. Once again, no detail goes unnoticed, yet all is part of the grand sweep of the seascape. In the opening movement, beside the numerous marvellous wind solos, its the radiance and dynamism of the LSO strings that really strikes the listener. The central movement, Jeux de vagues, with its quickfire playfulness, is as breathtaking as a voyage on the open sea, gripping in its immediacy and excitement. As for the concluding Dialogue of wind and the sea, it starts with a Hitchcock-like sense of suspense as storm clouds seem to gather. The wailing of wind instruments announces an episode of bracing choppiness and towering waters, while the second half of the movement feels like an exultant hymn to the sea and the powers of nature. Roth and his musicians balance the technical and poetic demands of Debussy's score with all the expertise and experience one would expect, and then some. The closeness of the recording in the tuttis merely adds to the palpable sense of excitement. At the end, the listener may be home and dry, but will surely be keen to get back in the waters.

For all the familiarity of these three works, each of these performances can look any competition confidently in the eye. For the dynamic range of the Ravel, the revelatory balances and exquisite wind playing in the Prélude, and the sheer involvement in La Mer, they should be high on anyone's list of essential recordings. Wholeheartedly recommended!