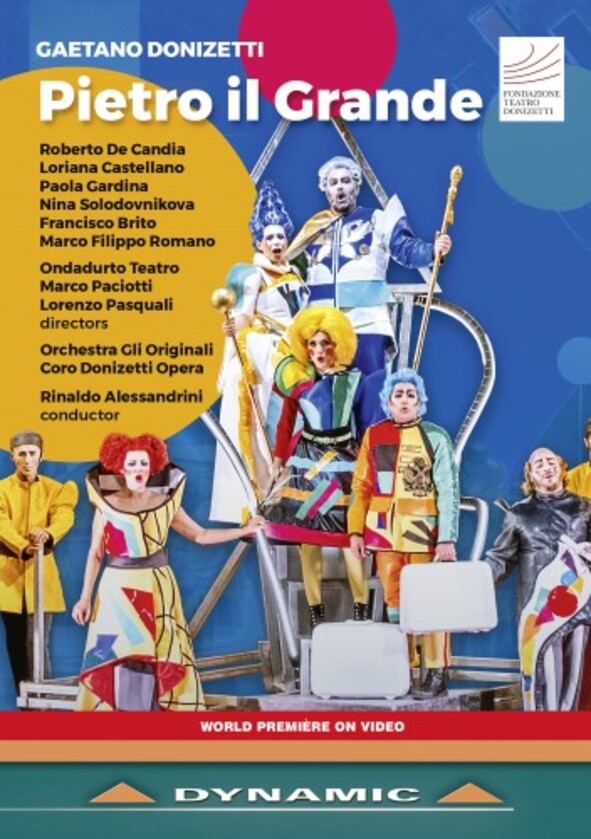 Pietro il Grande, Kzar delle Russie o Il falegname di Livonia (Peter the Great, Tsar of Russia or The Livonian Carpenter) was Donizettis second opera, composed when he was 22 years old, and the first to receive more than one production. To celebrate the 200th anniversary of the works première in 2019, the Fondazione Teatro Donizetti di Bergamo staged this rare melodramma burlesco in a new critical edition. The influence of Rossini and Mozart is clear, but the young Donizetti still managed to create a fresh and lively work that displayed early evidence of his mature style. This Donizetti Festival performance received widespread international acclaim, with a cast of excellent singers and a unique staging by Ondadurto Teatro (Marco Paciotti and Lorenzo Pasquali), influenced by Russian avant-garde art of the early 20th century.

The libretto for this long-neglected opera buffa was entrusted to the Marquis Gherardo Bevilacqua Aldobrandini who drew it from the French comedy Le menuisier de Livonie, ou Les illustres voyageurs by Alexandre Duval.

The plot is simple. In Livonia, the red-blooded carpenter Carlo, a protégé of the innkeeper Madama Fritz, is in love with young Annetta. One day the Czar Pietro arrives incognito at the village in search of his wifes brother. Carlo reacts aggressively to his enquiries and ends up being imprisoned by the local magistrate, but hes finally freed when Madama Fritz produces some documents that prove the youths noble origins, and thus his relation with the Czars family. Pietro, however, flies into a rage when he learns that Annetta, Carlos betrothed, is the daughter of the rebel Mazepa. But at the news that he is dead, Pietro forgives her and consents to their marriage.

After its first performance the reviewers recognised that in many passages [Donizetti] recalls the thoughts of his schoolmaster Rossini (Il Nuovo Osservatore Veneziano). In this opera there are indeed many references to Rossini (La Cenerentola) and Mozart (Le nozze di Figaro) which prove that the composer was already skilled at drawing inspiration from well-established models; at the same time, he is already starting to develop his own voice.

One of the important features of this world première recording is the direction and mise-en-scène which marked the operatic debut of ONDADURTO TEATRO (Marco Paciotti and Lorenzo Pasquali) who drew inspiration from the Russian artistic avant-garde of the early 20th century, creating an unconventional and alluring rendition, which featured a combination of different disciplines and lavishly colourful costumes and stage machinery.

The staging is brilliant.  Opéra Magazine

A contemporary and most definitely pop rendition.  Il Messaggero

Roberto de Candia showcased a virtuosic and powerful baritone the outstanding cast is not be missed.  Operawire

The scene was stolen by the acting effervescence and the remarkable vocal presence of Marco Filippo Romano, a basso buffo who sang the exhilarating role of Ser Cuccupis Loriana Castellano and Paola Gardina, as Caterina and Madama Fritz respectively demonstrated expressive qualities and vocal preciousness that have given an extra dimension to their characters.  Bachtrack