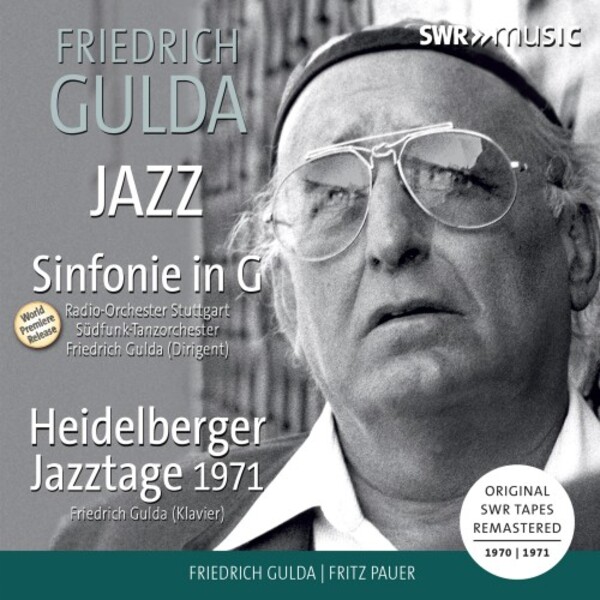 » no.4
Prelude and Fugue
Symphony in G major
Variations

» no.4
Prelude and Fugue
Symphony in G major
Variations

The Symphony in G heard on this album was discovered in the SWR archive in the course of research for the Friedrich Gulda album released on SWRmusic. Up to that point, nobody knew that the work existed, since there are no indications that Gulda was commissioned to write it, nor of a specific occasion for which he might have composed the symphony. Consequently, here is the world premiere of a piece which, following its studio recording on 20 November 1970, has never been performed in public.

Friedrich Gulda combined a classical string orchestra with a big band in his Symphony in G. Gunther Schuller (who was born in New York in 1925 and died in Boston in 2015) is considered to be the figurehead of this symbiosis between jazz and so-called classical music, called Third Stream. Gulda follows classical sonata form in the work.

At the beginning of the 1970s Gulda gave concerts that exclusively featured his own compositions, including his performance at the Heidelberger Jazztage 1971. There he first played Entrée and Variations. Originally, Entrée was planned as an individual piece but later made up the first movement of Sonatine. Entrée uses classical sonata form, but leaves ample room for improvisation. Indeed, almost all of Guldas works require knowledge of improvisation so as to keep them away from bunglers, as Gulda put it.

In 1966 Fritz Pauer was a prizewinner in the jazz competition Gulda had initiated. Pauer composed five Meditationen, the second of which is entitled Etude. A core element of this piece is the left-hand ostinato, above which the performer has to improvise.

In Guldas highly virtuosic Variations, the improvisations arise from the bass theme and then sink back again. One of Guldas few compositions without improvisation is No.4 from the ten-part piano cycle Play Piano Play. Prelude and Fugue was probably Guldas favourite work and formed the finale at Guldas Heidelberg performance.