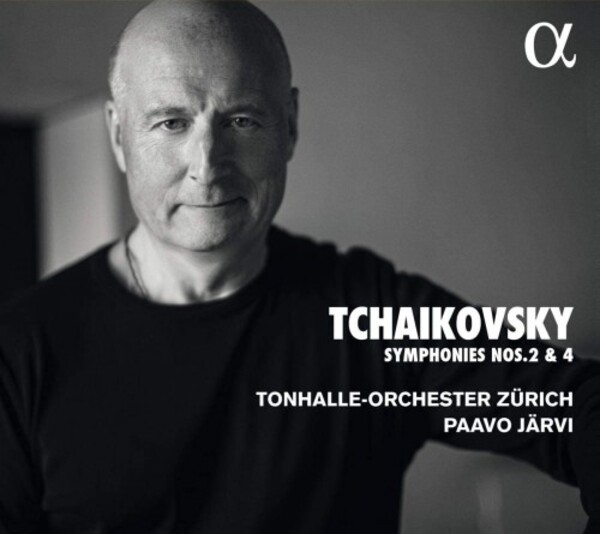 Principal Conductor and Music Director of the Tonhalle-Orchester Zürich since October 2019, Paavo Järvi continues his complete cycle of Tchaikovskys symphonies, following a first volume devoted to Symphony no.5 and the symphonic poem Francesca da Rimini. This second volume features Symphonies nos. 2 and 4.

The Fourth, composed in 1878 and nicknamed the Fate Symphony because of its sombre colouring, which may recall the neuroses attributed to Tchaikovsky, is one of his most frequently performed. The Second Symphony, composed in 1872 and much less frequently performed in concert, is known as the Little Russian because Tchaikovsky drew on Ukrainian folk tunes. The very first movement begins with a solo horn version of the folksong Down by Mother Volga...

Just five months after their impressive disc of the Fifth Symphony launched a new cycle of Tchaikovskys symphonies on the Alpha label, Zurichs Tonhalle Orchestra and its chief conductor Paavo Järvi are back with a coupling of the Second and Fourth Symphonies that is, if anything, even more striking. The first album in the series was admired for managing to balance the emotional and structural demands of the music, giving vent to its abundant expressive qualities while maintaining textural and formal clarity. Järvi achieves a similar feat here, both in the well-known, fate-haunted Fourth and in the uninhibitedly joyous and folk-infused Second (or Little Russian, a moniker deriving from its use of several Ukrainian folk tunes).

Maybe its something in the Järvi blood (Paavos father Neeme made a notable Tchaikovsky cycle for the BIS label), or the north-east European sensibilities that the Estonian conductor brings to this venerable central European orchestra, but theres a palpable Russian tang to the wind playing, and to the way the strings in particular dig into the music, yet without the waywardness that can sometimes mar home-grown Russian performances of these works. In any case, the orchestra evidently relish the local colouring of the Second Symphony, with its echoes of Glinka and Mussorgsky that quickly earned the enthusiasm of the Mighty Handful of Russian composers around the central figure of Balakirev: it was an achievement that Tchaikovsky never subsequently matched. Composed in 1872 and extensively revised in 1879-80, it is one of Tchaikovskys few whole-heartedly optimistic orchestral works, and although it was a play-through of the jubilant Finale that first earned the praise of the Mighty Handful (a movement that went on to score great success with audiences), the whole Symphony has a freshness and buoyancy that Järvi and his musicians bring out to perfection.

The first movement, with its Boris Godunov-like slow introduction coloured by horn and bassoon solos, opens up into a bracing Allegro vivo, while the perky Andantino marziale looks forward in some respects to the march movements of the last two symphonies. The quickfire Scherzo with its urgent cross rhythms has a fantastical element to it, reminiscent of the best of Tchaikovskys ballet music, and the way in which the codas brings together the triple-time Scherzo with the duple-metre Trio clearly anticipates the Scherzo of the Fourth, making the coupling particularly apt. It is to Järvis credit that he manages to keep in check the more tub-thumping excesses of the Finale while bringing out so much of its ebullient nature (including brilliantly driven string ricochets, and a sparkling piccolo solo before the helter-skelter coda). The performance as a whole  rhythmically pert, keenly paced and full of character  is surely one of the most successful accounts of the Little Russian now on disc.

Competition is stiffer in the case of the Fourth, but Järvi and the Tonhalle bring to it similar qualities, even if they dont lay on the Fate elements quite as heavily as some well-known performances. In fact, it is the inner movements  the Andantino with its heartrending oboe solo and other woodwind contributions, and a beautifully-etched pizzicato Scherzo with poised brass Trio  that are most ear-catching here, highlighting many of the Tonhalles sectional and solo strengths. There is, however, certainly no lack of excitement in the outer movements  they may be more contained than is often the case, yet they seem all of a piece with Järvis remarkably cogent overview of the Symphony as a whole. The horn fanfares combine majesty with thrill, and the strings, no doubt grateful for not being over-driven, produce a magnificently handsome tone throughout. As with the Little Russian, this is a performance to live with and savour on repeated listening, rather than merely blasting the neighbours to kingdom come, as Järvi finds space in the music where others simply plough straight through.

Producer Philip Traugott and engineer Jean-Marie Geijsen have done a remarkable job in capturing the orchestras distinctive sound in the Tonhalle Maag (its temporary home while the Tonhalle itself is refurbished), adding another splendid instalment to what looks set to be a fascinating cycle overall, and a further sign that the Järvi-Tonhalle partnership is one to watch.