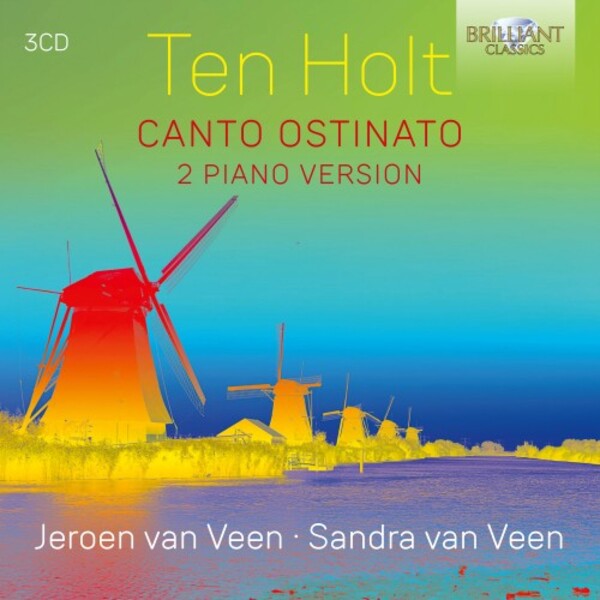 A new recording of the Dutch minimalist classic made by two of its most experienced champions.

Canto Ostinato is the work that defines the legacy of the composer Simeon ten Holt, who died in 2012 at the age of 89. There are 106 sections of repeating five-beat patterns whose patterned, repetitive but gradually evolving repetition produce a mesmerising effect on the listener  a dance-like sense of even unevenness  akin to masterpieces from the US minimalist school such as Steve Reichs Music for 16 Musicians and Philip Glasss Music in 12 Parts. However, the sections need not be repeated literally, and the performers can vary the dynamics, the manner of playing (legato vs. staccato, for example), and the octave in which the material is played.

Ten Holt completed Canto Ostinato in 1979 for an instrumentation of three pianos and electronic organ, but the cycle has proved itself adaptable to several different combinations of keyboard instruments, and these versions were brought together by Jeroen van Veen on a compendium produced by Brilliant Classics in 2014. Canto Ostinato XL (9453) included this two-piano scoring as well as versions for prepared pianos, organ and marimbas, but Jeroen and Sandra van Veen have re-recorded it in 2021; the fourth version they have produced, which brings together all the varieties of arrangement and articulation developed through the course of concert performances given across the world.

Tonality after the death of tonality, Ten Holt described the language of Canto Ostinato, and Jeroen van Veen compares its style to the music of Chopin: tranquil, immersive, melancholic and romantic. He worked closely with the composer over many years and can justly be regarded as the most authoritative living performer of his music.

Atmosphere and detail combine to create a gorgeous sonic environment into which you can dive and revel like a child in a ball-bath.  MusicWeb International

Theres an authoritative, even inevitable, quality to this reading that makes it compelling. The addition of a second piano enhances the musics richness and complexity.  Fanfare