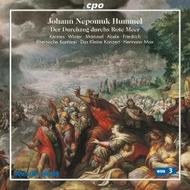 Johann Nepomuk Hummel, a native of Bratislava, numbers among Mozarts few documented pupils and was the only one of them to go on to enjoy a professional international career as a composer and a performing musician or pianist. Already on a first hearing of his playing, Mozart is said to have exclaimed: You have to leave the boy with me; I wont let him go; he can become something!
Hummel was employed at the Esterházy court and later became music director in Weimar. During his lifetime his many piano compositions and chamber works attracted special attention. The oratorio Der Durchzug durchs rote Meer (The Passage Through the Red Sea) at first went unnoticed and continued to be labelled as no longer extant even last year in the new article in MGG, though the autograph has been in the holdings of the British Library in London for more than a hundred years.
Der Durchzug durchs rote Meer is an oratorio for soloists, chorus and large orchestra, and shows the influence of Haydns Creation or the oratorios of Handel and C. P. E. Bach but is shorter and an entirely independent piece of work in its melodic invention and formal elaboration. As so often before, Hermann Max and his ensembles have done the musical world a huge favour in preserving this tremendous work for posterity and almost certainly rescuing it from musical oblivion.