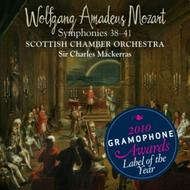 Sir Charles fruitful partnership with the SCO has been evident since their highly successful recording of Mozart Requiem (CKD 211) was received to wide critical acclaim in 2003. Their special relationship and musical synchronicity makes the Mozart Symphonies Nos 38  41 equally exhilarating.

The Vienna Symphonies show Mozart at his most diverse, both in musical content and in orchestral colouration. Notable firsts include Mozarts use of clarinets rather then traditional oboes as the main woodwind instrument in Symphony No 39 and the introduction of a new orchestral colour in the form of muted violins in the Jupiter.

Sir Charles Mackerras, the SCOs Conductor Laureate, has produced numerous award-winning recordings, performed fifty times at the Edinburgh Festival and in 2005 was the first recipient of the Queens Medal for Music.

The Scottish Chamber Orchestra has a large UK-based fan base following performances throughout Scotland and regular appearances at the Edinburgh, St Magnus and Aldeburgh Festivals, the BBC Proms and on BBC Radio 3.

Mackerras's performance is as thrilling as one would expect from this great Mozart conductor. - The Sunday Times

BBC Music Orchestral Disc of the Month
These performances are so exhilarating that I listened to all four symphonies straight through at a first hearing, mesmerised by the variety and intensity of the music itself, sounding here completely fresh, and the virtually flawless renderings by the excellent Scottish Chamber Orchestra, with Sir Charles Mackerras at his most penetrating. Perhaps the first thing that strikes one is the rawness of so much of this music, emphasised in accounts which give encouragement to the winds to blow their hardest, and with a string section of only 24 players. Then there is the scale: the first movements of the Prague Symphony lasts for 18 minutes, since Mackerras takes every repeat. In such a rich and innovative movement, that is certainly justified, but it shows Mozart working on what is normally thought of as a Beethovenian scale. The strenuous seriousness and originality of Mozarts outer movements, and the colour of his orchestration, maybe shouldnt come as any surprise, but the wonderful thing here is that for almost anyone, I think, they will. Mackerras doesnt short-change us on the tenderness and often painful lyricism, either, nor is he afraid to relax the tempo as a festive or belligerent motif gives way to a gentler one, with the strings, despite their small number, ravishing us with their tone.Obviously there are a few points where one can differ; given that the minuet of the 40th Symphony is marked allegretto, I was surprised to hear it played so briskly, when a slower tempo would underline its grimness. And on the matter of repeats, wouldnt it be permissible to play many of them but not all? As it is, what we get is two whole performances of each work, with tiny exceptions. If each section of a minuet is repeated the first time, need there be repetitions the second time round? I only ask. Whatever ones small reservations, these two discs show as clearly as any I know the largeness of the human spirit, and renew ones astonishment at Mozarts sovereign genius.
BBC Music Magazine, March 2008 - Michael Tanner

Sunday Times - Classical CD of the Week
At the Edinburgh festival, Brian McMaster regularly showcased Mackerras  the worlds greatest Mozart conductor, in his view  in a series of the great Mozart operas. For his grand finale in 2006, the SCO played Nos 1-9 in Mackerras cycle of the Beethoven symphonies, recorded live by Hyperion, which stands as one of the most satisfying on disc. These marvellous studio recordings of Mozarts last four masterpieces are possibly their fines records to date. Imbued with the spirit of the composers masterly Viennese comedies and a Beethovenian intellectual rigour, the fleet outer movements of these symphonies sound like conversation pieces between sparkling strings, witty woodwinds and braying brass. With Mackerras, we get the best of both the modern and period-instrument worlds, with the singing flutes, oboes and clarinets (glorious in the trio of the E flat Symphonys minuet), natural trumpets and horns making a magnificent sound in the closing pages of the Jupiters fugal finale. In his note, Neal Zaslaw evokes the intimacy that Mozarts audiences enjoyed, but Mackerras shows that these are symphonies on the grand scale: I dont know more enthralling accounts of the G minor and the Jupiter on disc.
Hugh Canning  3rd February 2008

The Guardian
In their regular work together, Charles Mackerras and the Scottish Chamber Orchestra have developed a distinctive and very effective style, one that combines the best of both the modern and the period-instrument performing styles. How potent that hybrid can be is shown by these outstanding performances of Mozart's last four symphonies, which have a dramatic presence and intensity that is very special indeed. Heard in sequence, Mackerras's accounts of the four works have a cumulative power that leads unerringly towards the finale of the Jupiter Symphony and its astonishing contrapuntal mastery. Everything in the Prague Symphony (with its expansive first movement thrillingly sustained by Mackerras), and the lighter, more pastoral associations of the E flat No 39, as well as in the dark hues of the G minor No 40, seems to be crowned by this breathtaking performance of the Jupiter. Altogether, these are the finest versions of Mozart's greatest symphonies to have appeared on disc in years.
5/5 Stars - Andrew Clements - 1st Feb 2008