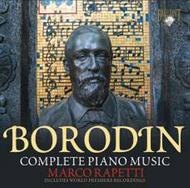 Greatly intrigued by instrumental technique and principles of orchestration, Borodin learned as a teenager to play the piano, flute, oboe and cello. He always enjoyed performing in chamber ensembles, particularly as a student and during the early years of his scientific career abroad, when he could spend more time making music. He also loved playing piano duets, especially with his classmate, Mikhail Shchiglev, and later with his wife and with his friends of the Moguchaya Kuchka.

Unfortunately, of all his companions, he was the one who left the smallest quantity of piano music. It is recorded here in its entirety, some works for the first time, in reverse chronological order that could roughly be divided into three periods: 186287 (the years of maturity), 185962 (the years spent abroad) and 184358 (the youthful years).

Marco Rapetti studied piano and musicology in Italy, France and the United States. Master of Music and Doctor of Musical Arts at New Yorks Juilliard School, he has performed as a soloist and in chamber ensembles in Europe, America, Africa, Australia and Japan. Winner of many prizes in piano and chamber music competitions, he has recorded for Fonit-Cetra, Dynamic, Stradivarius, Frame, Phoenix, and Brilliant labels, including rarities such as Lyapunovs piano works, Dukass Sonata, Malipieros works for two pianos, etc. He has published pedagogical and musicological articles in several Italian music magazines. He is presently a professor at the Conservatory of Genoa.