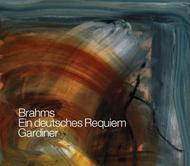 SDG is pleased to present the last recording issued from the 2008 'Brahms: Roots and Memories' tour, in which John Eliot Gardiner and his ensembles explored the music of Johannes Brahms.

Brahms Ein deutsches Requiem is presented along pieces by Heinrich Schütz (1585-1672) which might have inspired its composition, giving the listener a new insight into the composers mind and music making.

Deeply moving, profound, and powerful, the Requiem is central to our understanding of Brahms compositional personality and inner spiritual life. Behind its dramatic gestures and 19th century grandeur, it reveals Brahms obsessions with folk-songs and the music of the past. The libretto, assembled by Brahms himself based on the Lutheran Bible, makes it a definitive personal statement of his position in matters of religion.

The booklet includes a note by composer Hugh Wood, explaining how the pieces relate to each other and giving a moving account of Brahms as a composer and as a man.

"Does the world need another recording of Brahms's German Requiem? ...John Eliot Gardiner convinces us that there is room for one more, even of a performance he and his garlanded choir gave four years ago at the Usher Hall, Edinburgh. The choral ensemble is superb; intonation perfect. Gardiner's instrumentalists' meticulous attention to authentic performance style adds a further dimension to a glorious reading of this beautiful piece. Highly recommended." - The Observer