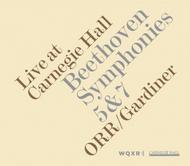 Nearly twenty years after their acclaimed Beethoven Symphonies recordings for Deutsche Grammophon, Sir John Eliot Gardiner and the Orchestre Révolutionnaire et Romantique returned to this repertoire in 2011 for the first time, in a tour that took them to London, Philadelphia, Washington and New York. The concert in Carnegie Hall was broadcast live by WQXR, who kindly agreed to make the recording available to us to release on our label.

The Seventh, famously described by Wagner as the apotheosis of the dance, stands out by its sheer physical energy, expressed in its many obsessively repetitive passages. The Fifth, often considered to be a deeply personal piece, also reveals echoes of revolutionary songs.

The album is packaged in a digipack and contains a 36 pages booklet with original notes by BBC presenter and music journalist Stephen Johnson.

Press acclaim for the 2011 tour:
The Allegretto was sinuous and haunting, the finale joyously visceral. And from fates knock at the onset of the Fifth Symphony, Mr. Gardiner wrought Beethoven fresh and strange, with gutsy, brash and rasping instrumental voices united in triumph.  The New York Times

A galvanic, no-holds-barred performance... The conductor teased out details in Beethovens scoring that made the music sound at once inevitable and new to the ear  The Washington Post

It was revolutionary, it was romantic, it was wonderful  The Times *****