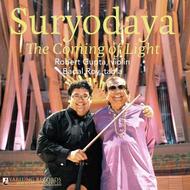 Suryodaya: The Coming of Light

Badal Roy, famous for his many recordings on Indian drums for Miles Davis and Ornette Coleman, returns in this audiophile recording made in the Walt Disney Concert Hall in Los Angeles. He joins his cousin, the charismatic Robert Gupta, playing the Nathan Milstein Stradivarius violin from 1716.

Not only is Robert superbly talented and the youngest member of the LA Philharmonic, but he is also a Senior TED fellow, executive director of Street Symphony (which brings music to homeless mentally ill people, and the real-life violin teacher of Nathaniel Ayers, the person so sensitively portrayed in the major motion picture The Soloist).

This recording traverses time and several continents, from the opening Indian raga for violin in tabla (Raga Jaunpuri), through Medieval Europe with Bibers famous Pasaccaglia through John Harbisons Four Songs of Solitude and the Pereira suite written for Robert himself. Badal Roy premiers Calcutta Sunrise for tabla solo on the opening track. Roy still wears the same sunglasses and channels the same energy he did in the sixties and seventies. Even before the albums release, Calcutta Sunrise won the Audio Oasis Award at the 2012 'The Show' in Newport.

'Suryodaya' is personal music and a tremendously personal recording. Robert invites us inside his world as he plays and bares his soul to you, in the magnificent temple that is Walt Disney Concert Hall. This is not flash, not technical bravura, but rather a testament to the deeply personal, a meditation. As we listen to and live through this recording, let us imagine that we are Robert; that we stand in this almost holy acoustic space, playing Nathan Milsteins prized Stradivarius.

Enjoy this recording and feel at home in Walt Disney Concert Hall.