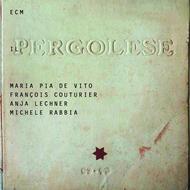 The text of the Stabat Mater - translated into Neapolitan by Maria Pia De Vito - and the opera arias, transformed into songs and vivid narrative, open frames providing the key to reinterpreting Pergolesi. François Couturiers arrangements widen Pergolesis structures, offering space for improvisational interaction. But this is a real group project, a discourse among acoustic sounds, with rhythms of drums and metals, and sampled and real-time electronics. Sound textures grow dense with the richness of instrumental counterpoint or are set free in electronic soundscapes and along coloristic, percussive lines, as cello becomes voice or voice becomes an instrument.

The project was commissioned by the Festival Pergolesi-Spontini of Jesi in 2011, and the improvisational component ensures that each performance of Il Pergolese is unique. The present interpretation was recorded in Lugano in December 2012, and produced by Manfred Eicher.

Singer Maria Pia De Vito makes her ECM debut with 'Il Pergolese'. She has long been active in improvisation and jazz with musical partners including John Taylor, Ralph Towner, Rita Marcatouli, Norma Winstone, Steve Swallow, Paolo Fresu, Gianluigi Trovesi, Colin Towns and many more. Musical research, exploring beneath the works surfaces, has been a key element of her performances, whether the music has been jazz of the American songbook, idiosyncratic Neapolitan vocal music (De Vito is a native of Naples), adaptations of Monteverdi with Bruno Tommaso or, as here, Pergolesi as an improvisational resource.