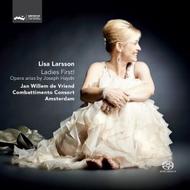 The album Ladies First presents the highly-regarded Swedish soprano Lisa Larsson performing arias from the little known operas of Joseph Haydn, including Armida, Lisola disabitata and Linfedelta delusa. She is joined on this recording by the Combattimento Consort Amsterdam and conductor Jan Willem de Vriend.

Celebrated Swedish soprano Lisa Larsson started her career early as a concert flautist, and later studied in Basle and became a member of the Zürich Opera Studio, where she performed under, amongst others, Franz Welser-Möst, Nikolaus Harnoncourt and Christoph von Dohnanyi. Lisa Larssons recordings include the Triumph of Aphrodite with Welser-Möst, and Bachs Christmas Oratorio (BWV 248), Magnificat (BWV 243), Easter Oratorio (BWV 249) and several solo cantatas for Erato under the direction of Ton Koopman.

In 1790 Haydn was generally considered the most famous composer of his age, but the relative obscurity of his operas in comparison with his other works has continued from that time to the present day, with works like Armida, Lisola disabitata, and Linfedelta delusa being far less known today than those of Haydns contemporaries Gluck and Mozart.

Nonetheless, his mastery of the symphonic genre in combination with his ability to write elegant vocal lines and melodic text interpretation reveal him to be a significant figure in the history and development of the operatic tradition.