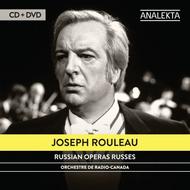 » Song of the Viking Guest

» Song of the Viking Guest

By 1972, Joseph Rouleau, at the height of his glory, was singing at Londons Covent Garden (his home base) as well as in Oxford, Liverpool, Cambridge, Manchester, Glasgow, Edinburgh and Nice. But he returned to Montréal several times, notably to record an episode of 'Beaux Dimanches', remastered for this recording, with the Radio-Canada orchestra under the baton of Jean Deslauriers, whom he had known from his early days.

He performs two selections from Borodins Prince Igor, another opera that was a fixture of his career, and the aria of the national hero Ivan Susanin in Glinkas A Life for the Tsar, a huge success when it premiered and that conferred on Glinka the title of the first Russian composer.

He also sings the 'Song of the Viking Guest' from Rimsky-Korsakovs Sadko, made famous by Chaliapin, and two selections by Tchaikovsky: King Renés aria from Iolanta (based on a play by Henrik Hertz and set to a libretto by his brother, Modest Tchaikovsky), and Prince Gremins aria from Eugene Onegin, in which the retired general relates his love for his wife, Tatyana, whose heart had been broken by Onegin years earlier.

Rouleau also sings (with piano accompaniment) Dosifeys aria from Khovanshchina, the unfinished opera by Modest Mussorgsky inspired by the Moscow rebellion of 1682, and Alekos cavatina from Sergei Rachmaninovs Aleko, composed in 17 days as a graduation work, earning the young composer a rarely awarded Great Gold Medal from the Moscow Conservatory.

To accompany the CD album, we offer you a bonus DVD (28 minutes), on which Joseph Rouleau performs the final aria from Boris Gudonov. The title character, seeing his country descend into chaos and wracked with guilt and hallucinations, sinks into madness and dies, asking for Gods forgiveness.