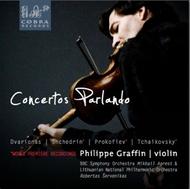 Pezzo Elegiaco 'By the lake'

Pezzo Elegiaco 'By the lake'

The charismatic and innovative violinist Philippe Graffin, described as "todays quintessential French violinist" and by the The Times as a brilliant musical "conversationalist", is at the creative heart of a new release of Russian repertoire, 'Concertos Parlando', or 'concertos with a story', the first in a series of strikingly individual and fascinating projects for Cobra Records.

Tchaikovskys famous concerto is heard here with a different cadenza for the first time - a mesmerising cadenza by the great Eugene Ysaÿe which every violinist will surely want to hear. Prokofievs own orchestration of the second of his Five Melodies, a wordless song cycle, is recorded for the first time alongside Rodion Shchedrins orchestration of the remaining four, a project initiated by Graffin.

The violinists artistic collaboration with the multi award-winning Russian composer Shchedrin began when he asked Rodion if he would write a concerto in a similar vein to Shostakovichs first Piano Concerto with trumpet and strings, but for the violin. The resulting Concerto Parlando, a conversation between a free and gypsy-like violin and an authoritative, cynical trumpet, was commissioned by Philippe Graffin and the Association A Tempo and is recorded live from its world première in London with the BBC Symphony Orchestra.

Perhaps the true story of this CD is how Philippe Graffins inquisitive mind and research successes are constantly finding new gems and broadening the repertoire for the instrument.

Philippe Graffins extensive and successful discography began with a recording with Yehudi Menuhin and the Royal Philharmonic orchestra and includes many world premières for a number of independent labels. His idea to record the complete Saint-Saëns concertos launched Hyperions Romantic violin series. All have been exceptionally praised, with his recording of the Elgar Concerto considered by BBC Record Review a unique recording you might want to file alongside Albert Sammons, and the young Yehudi with the composer.

Cobra Records is delighted Philippe has chosen the label for this unique recording and the compelling performances augur well for the projects to follow.