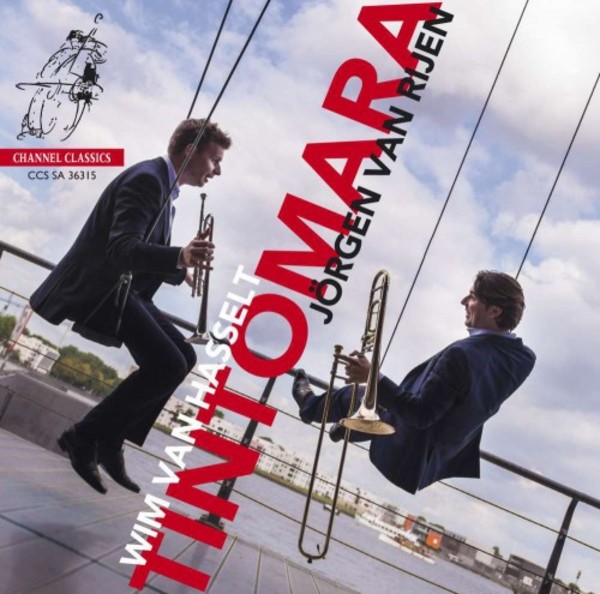 Trio for trumpet, trombone and piano

My dearest, my fairest
Sound the trumpet, Z335
Timon of Athens, Z632

» Hark! how the songsters of the grove

Piano Trio in A minor

Trio for trumpet, trombone and piano

My dearest, my fairest
Sound the trumpet, Z335
Timon of Athens, Z632

» Hark! how the songsters of the grove

Piano Trio in A minor

On this programme, the performers explore the versatile, ambiguous character, the range of colours, possibilities and even boundaries of the combination of trumpet and trombone, in which the soprano voice of the trumpet forms a wonderful combination with the tenor of the trombone.

The CD is named after Folke Rabes composition Tintomara - a dualistic figure from The Briar Rose Book by the Swedish author Jonas Love Almqvist (1793-1859) - which reflects the male and female character of the trumpet and trombone.

Duets and a diversity of arrangements, but also solo works for trumpet and trombone, make this a rich and surprising release.

Principal trombonist of the Royal Concertgebouw Orchestra, Jörgen van Rijen, is also much in demand as a soloist, with a special commitment to promoting his instrument, developing new repertoire for the trombone, and bringing the existing repertoire to a broader audience.

Former member of the trumpet section of the Royal Concertgebouw Orchestra Amsterdam, Wim Van Hasselt is now professor of trumpet at the University of Music Freiburg in Germany and regularly gives solo appearances and masterclasses at home and abroad (Europe, North America and Japan). He is also an active chamber musician in different ensembles and has appeared at the festivals of Lucerne, Bad Kissingen and Schleswig Holstein, among many others.