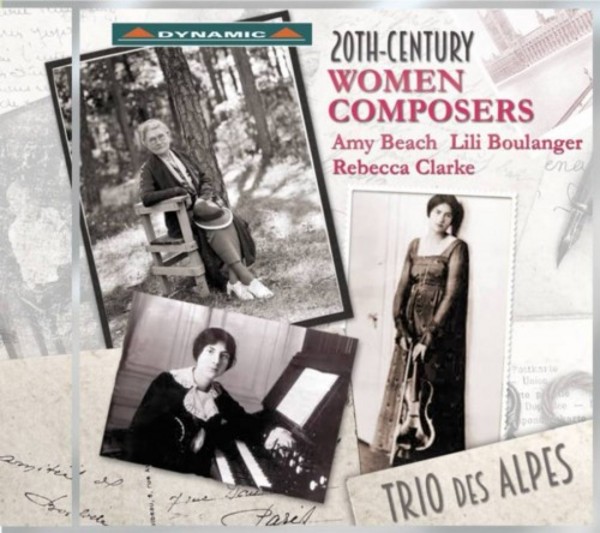 Three women for whom music was not only an interest and a passion but also an informed choice of profession, carried out with dedication and enthusiasm.

Rebecca Clark was one of the first women to study composition. Her 1921 Trio, one of her best works, blends in sound elements of different origin, which in the final 'Allegro vigoroso' evoke the drive of English folk dances as well as some rhythmic and percussive impulses recalling Bartok.

Fame, appreciation and consideration marked the life of Lili Boulanger. Sister to Nadia, she was born into a family of musicians, who recognized and fostered her inborn musical skills. D'un soir triste and D'un matin de printemps, both composed in the spring of 1917 and completed just months prior to her death, are a sort of diptych, as if they were two parts of a single musical idea.

The pianist and composer Amy Beach was the first American woman musician of success. She wrote several works in different genres: symphonic, concert, choral, chamber and operatic. The Trio Op.150 belongs to her years of maturity. Despite being written in 1938, the piece is tonal and shows solid writing inspired by late Romanticism. The four vocal compositions of this programme bear witness to Beachs interest in this repertoire and are significant examples of her song output, which counts over one hundred works and which greatly contributed to the musicians renown.

The Italian Swiss ensemble Trio des Alpes devise thematic projects with cleverly conceived programmes, wishing, among other things, to revive unjustly neglected music works. Each piece is treated with care to the detail and respect of the original manuscript, seeking to comply with the composers intentions.

Women Composers is one such project, where the Trio des Alpes wishes to spread the works of 20th-century women composers (those in the present CD being a sample) as well as commission new pieces from contemporary women composers.