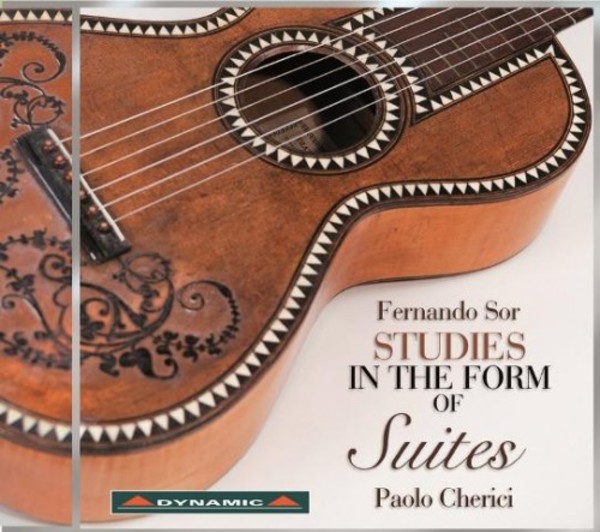 Sor - Studies in the Form of Suites

An unexpected polyphony: that is, above all, what impressed the people who were lucky enough to listen to Fernando Sor playing the guitar. Not a mere chordal accompaniment, or a bare melody: his guitar was not only virtuosic - in his hands it turned into 'un instrument darmonie', according to the opinion of the 'Revue Musicale' (Paris, 1833-34).

To compose studies, works for someone who is learning an instrument, is to show a student a path, along which an initially alien and unknown environment can be transformed into a landscape that is individually meaningful. At the same time, to compose studies is also a way to convey the distinctive traits of ones personal music thought. And that is where Sors studies seem different from others: in finding this form, his personal touch takes not the shape of a set of commands but of a graceful parable, which, in the small space of a few measures, can tell a story and at the same time incorporate the rule without pedantry.

Sor composed six collections of studies, for a total of 121 Studies, published during the twenty years of his artistic maturity: from age 37 to 59, or from 1815 to 1837.

The Studies follow a tonal sequence, that is to say they are organized in cycles defined by their key (hence the title 'Studies in the form of Suites'), meant to show that contained forms can give origin to more ample musical paths, able to shed new light on the single pieces.

In order to recreate the original timbre of these pieces, the guitar used for this recording is an original instrument made by the Rovetta Brothers in 1817, perfectly preserved. It is characterised by a gorgeous floral wooden decoration in relief at each side of the bridge. The purfling around the soundboard, the rosette, and the final part of the fingerboard are inlayed with a series of ivory triangles. Back and sides are in curly maple. The neck, slim and elegant, is made from pear wood stained black.