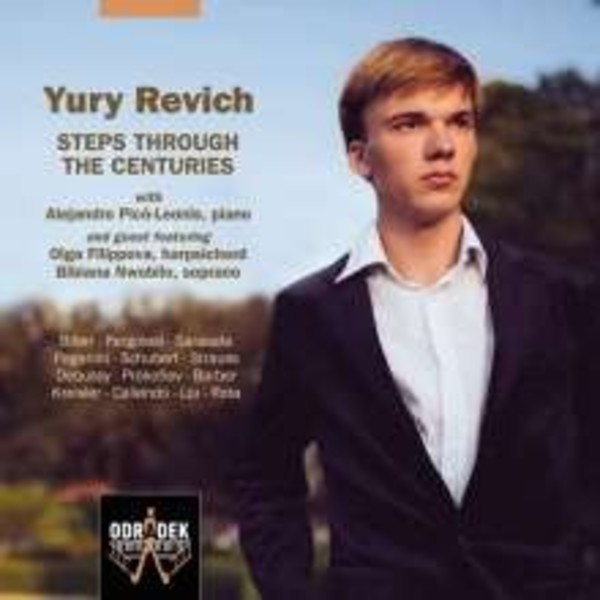 Steps through the Centuries

» no.3 Sure on this shining night

Violin Sonata no.5 in E minor

Violin Concerto no.2 in B minor, op.7

Violin Sonata no.12 in E major

» Dance of the Girls with Lilies

» no.3 Sure on this shining night

Violin Sonata no.5 in E minor

Violin Concerto no.2 in B minor, op.7

Violin Sonata no.12 in E major

» Dance of the Girls with Lilies

Yury Revich is a young Vienna-based Russian violinist taking the world by storm. At only 23, he was named Young Artist of the Year at the 2015 International Classical Music Awards, where he was hailed as a stunning talent...already a remarkably mature artist with a highly distinctive musical personality...He is on his way to becoming a great musician of the 21st century.

Of his CD for Odradek, Steps Through the Centuries, Yury Revich says: The album was conceived as a journey back through the centuries, from the very contemporary to the early Baroque, with each piece marking a small step through time, displaying much of the instruments history and showcasing its rich possibilities. It features both original works and arrangements, including music by Biber, Mozart, Schubert, Richard Strauss, Debussy, Prokofiev and Barber, but it opens with three contemporary pieces - by Christopher Caliendo, Wen Liu and Benjamin Rota - each of which is dedicated to Revich.

The violin can be heard talking and singing, but also demonstrating its virtuosic potential, for example in Kochanskis arrangement of La Campanella. With the opera and song arrangements, I hope to show how adeptly the violin can mimic the human voice, a technique famously described by Paganini as suonar parlante. From the sorrow and grief of Schuberts songs, through the tranquillity and inner passion of Debussys Claire de lune, to the joy of Pergolesi, and even the nervous tension created by the almost electronic soundscape of Wen Lius Love Song, the whole range of human emotions can be conveyed through the strings of a violin. But the lighter side of life is also featured, most notably in the humorous Russian Slovak dances of Christopher Caliendos Sonata, and even in the atmosphere of the Viennese salon created in Zum Beispiel by Benjamin Rota.

Yury Revich is accompanied for most of this journey by pianist Alejandro Picó-Leonís, but also by Russian harpsichordist Olga Filippova (in the Biber Sonata) and by soprano Bibiana Nwobilo who makes a guest appearance singing Strauss Morgen!.