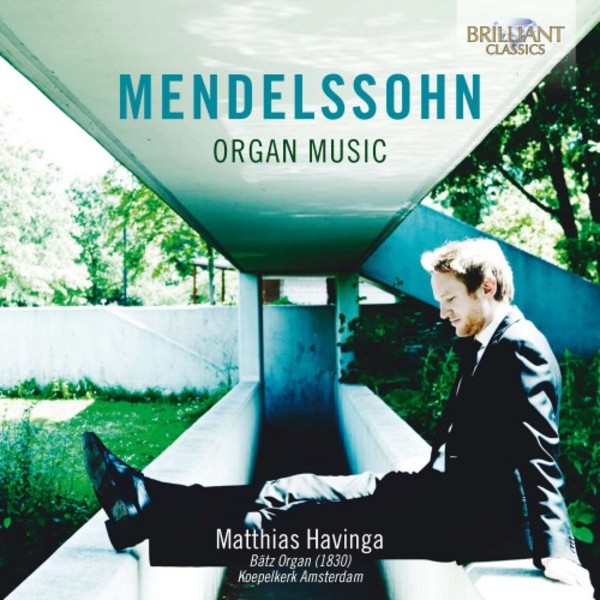 An invaluable single-disc survey of Mendelssohns organ music, including not only works originally conceived for the instrument but also arrangements to display the majestic tonal possibilities of a fine Dutch instrument as well as the virtuosity of one of the most talented young organists in the Netherlands.

Bach was a central figure in the musical education of the prodigious young Mendelssohn, and he continued to expand the familys collection of the Leipzig masters organ music. However, he was also gifted at the art of improvisation which is central to the organists training, and he later wrote out several of his best improvisations as compositions for posterity. His organ music abounds in the elegance and impetuous vitality which characterise his music in general, while his lifelong immersion in the music of Bach is evident in both the counterpoint and the chorale movements to be found throughout his organ sonatas.

Matthias Havinga plays three of the best-known of those sonatas on this album: Op.65 nos 3, 4 and 6. No.3 concludes in a lovely song without words, a style which he revisited for the Andante tranquillo of no.4. No.6, by contrast, opens with a magnificent set of variations upon the Our Father chorale theme Vater unser in Himmelreich, elaborated with such mastery by Bach in the Clavierübung III.

Three standalone movements include an energetic E minor fugue and a much more introverted, even melancholic F minor fugue (a cousin to the despairing F minor string quartet which became his last major composition). The Allegro in D minor begins in brilliant and pianistic fashion (perhaps also owing something to Bachs D major Prelude and Fugue, BWV 532) before seguing into a chorale and fugue. The arrangements are of the overture to his oratorio St Paul (transcribed by the English organist W.T. Best) and the Scherzo from his incidental music to A Midsummer Nights Dream, which translates surprisingly well to the organ. It is played here on the 1830 Bätz organ in the Koepelkerk in Amsterdam by Matthias Havinga, who also contributes an extensive booklet essay, considering Mendelssohn both as an organist and organ composer.