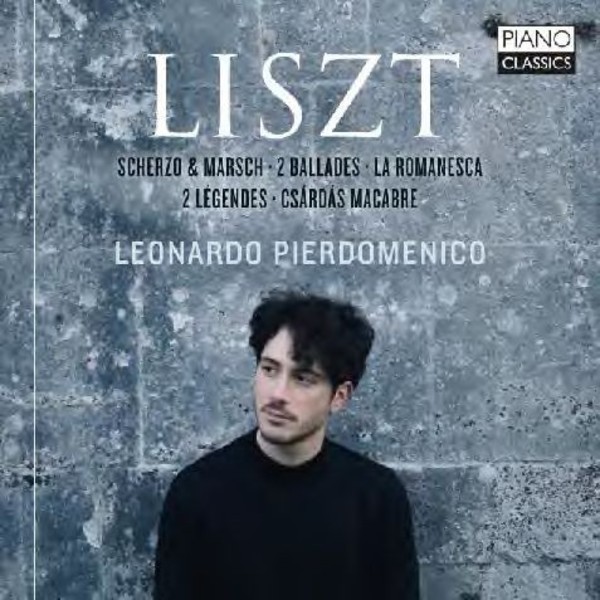 Leonardo Pierdomenico was a finalist at the Van Cliburn International Competition held in May 2017 in Fort Worth, Texas. Six months later he made this, his debut studio album, which is sure to be listened to eagerly by pianophiles across the world. Pierdomenico played the Second Concerto of Liszt in the Van Cliburn competition final, and his performance won him the Raymond E. Buck Jury Discretionary Award; his semi-final performance of Chopins First Ballade was included on the internationally released CD of highlights from the competition.

At 24 years of age, Pierdomenico has also been a first-prize winner at the 2011 Premio Venezia Piano Competition held in La Fenice in Venice, and a semifinalist at the 2016 Queen Elisabeth International Piano Competition. Born in Pescara, he has performed across Italy having graduated from his local conservatoire, as well as giving recitals in major venues in Berlin and Brussels.

Liszt is a natural choice for his debut recital. However, Pierdomenico has largely chosen the path less well trodden in his selection from Liszts vast oeuvre. He has concentrated on the brooding, melancholic and introverted sides of the composers multifaceted personality. The Csárdás macabre is one of Liszts most radical conceptions, with sequences that push at the boundaries of tonality. The two Légendes are based on the miracles of two of the composers namesake Saints, St. Francis of Assisi, who allegedly preached a sermon to an attentive flock of birds, and St. Francis of Paola who, legend has it, crossed the Strait of Messina fashioning a vessel from his cloak and staff after a ferryman refused him passage. As well as the justly ubiquitous Second Ballade, Pierdomenico gives a rare outing to the crusaders song of the First; another rarity is the single-movement Scherzo und Marsch which finds the composer in heroic vein, replete with demanding fugato sections and rapier-like arpeggios.

This new recording is further distinguished by booklet notes on the individual pieces by a slightly older Liszt pianist of distinction, Mark Viner, who has also made several critically acclaimed recordings for the Piano Classics label.

This is the stunning debut recording of Leonardo Pierdomenico, a 25-year-old native of Pescara in the Abbruzzo region of Italy and a graduate of the Santa Cecilia Academy in Rome. ... His prodigious prestissimo leggiero, the ability to play extremely fast yet lightly, lends his Scherzo and March and Csárdás macabre quicksilver speed and tremendous power that never devolves into banging. ... On the basis of his Liszt alone ... I dont hesitate to suggest that Pierdomenico is a musician of rare sensitivity and vision, and that following his further development will be a pleasure.  Patrick Rucker
Gramophone September 2018