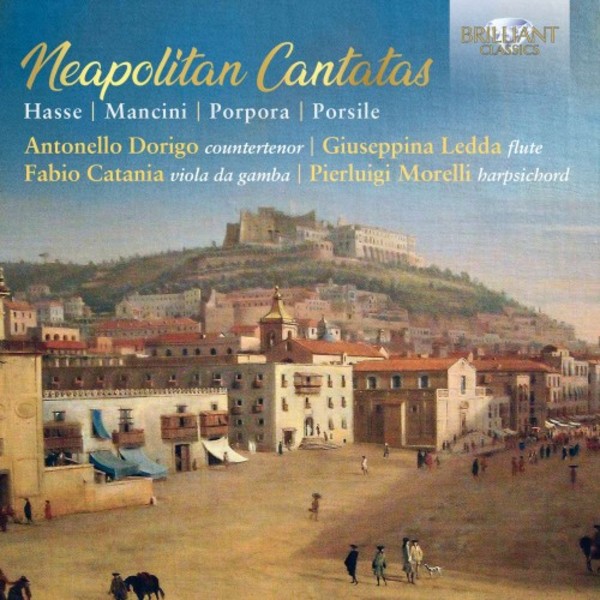 The works in this collection attest to the high standard of music-making in Naples. The composers here recorded were at the forefront of the achievements of Neapolitan music in the first half of the 18th century, the golden age of music production in the southern Italian centre. And the Neapolitan style at this time was fashionable beyond the borders of Italy, as well. Among all the composers presented, only Mancini lived and worked almost all his life in Naples. The others spent their lives travelling or serving foreign courts.
This programme exploits the felicitous pairing of the voice with flute, two instruments similarly tied to the expressivity of human breath. Throughout this programme a baroque transverse flute, or traverso, is used, either called for specifically or substituted for the recorder. When these pieces were written the two types of flute still existed alongside each other as equals, as they had done for centuries before the transverse variety began to dominate later in the 18th century. Use of the viola da gamba for the bass part also finds justification in Naples. While in Rome the instrument had almost completely disappeared by the first half of the 17th century, it endured in Naples and continued to be used. Several mid-18th-century viole da gamba, preserved to this day, in various sizes by luthiers from the Neapolitan Gagliano family attest to the much later persistence of this instrument in that area.
Nicola Antonio Porpora was one of the most appreciated composers and teachers from Naples. He taught singing and composition in Venice and Naples, and his ability to set the Italian language to music was internationally celebrated. His cantata Freme il mar e col sussurro exists in two manuscript versions, housed at Naples and Rome, respectively. The latter, performed here, is pitched a third lower and probably intended for the transverse flute.
Principal among Porporas students were Johann Adolph Hasse and Joseph Haydn. Hasses great experience is highlighted in the cantata Passa da pena in pena, which calls specifically for a transverse flute despite the chosen key being among the most challenging for the instrument. Francesco Mancini, an organist, exploits the pastoral features of the flute in the final aria of his Filli mia, tu infedele. Here the called-for recorder is substituted with traverso, as it is in the anonymous, yet expertly composed Non lasciarmi o bella speme.
Giuseppe Porsile, Porporas fellow-student under Gaetano Greco, became Director of the Royal Chapel of Barcelona in 1706 and then in 1711 moved to Vienna to serve the Austrian Empress Wilhelmina Amalia, where in 1720 he was appointed Court Composer. However his early opera Il ritorno di Ulisse alla patria was premiered in Naples in 1707 and would become his most successful work. A collection of chamber arias for voice with solo instrument and bass, excerpted from this opera and intended for the amateur public, was published that same year. Of those offered here La costanza con amore calls specifically for flute, while the other two feature unspecified solo parts nevertheless well suited to the instrument.