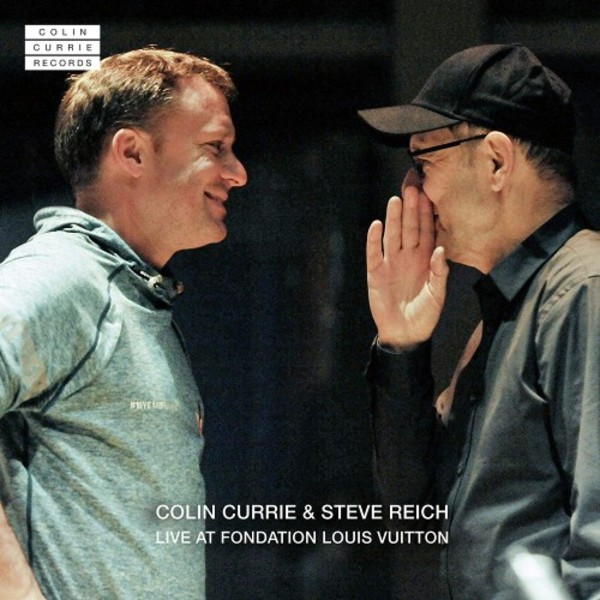 The third album on Colin Curries label celebrates the percussionists artistic relationship with the American cultural icon Steve Reich. Programmed and performed at the composers request and under his supervision, this album is essential for any Reich fan, capturing a group of truly worldclass performers at the peak of their powers.

For this recording, Colin conducts and performs with the Colin Currie Group and their long-standing collaborators Synergy Vocals. Steve Reich himself joined Colin on stage to perform Clapping Music.

Late last autumn, I received an intriguing phone call. The Fondation Louis Vuitton in Paris was planning a Steve Reich presentation - in person, in exhibition, in discussion and moreover, in concert. The composer had expressed the desire to appoint my group as ensemble in residence, with the parameters fluid and a lot of repertoire under discussion. As well as flagship works we have already recorded (Drumming and Quartet), some other pieces new to us were being tabled, including Proverb and the deliciously fresh and breezy Pulse from 2015. After a highly enjoyable juggling act, we devised a three concert format, over two days - and five works from those concerts are now heard together on this album.

Its always rather incredible to acknowledge that Steve is still composing, touring and sharing his experience so widely as he begins his ninth decade of life. For me and all the musicians on this album, performing his music is both a thrill and a privilege, and I hope that these live recordings give an extra sense of that cut-and-thrust that inhabit our concerts of this unique music.
- Colin Currie, December 2018

As is often the case these days when the composer himself is present, Currie and Reich kick off with a punchy performance of Clapping Music. A strong rhythmic focus is maintained for Music for Pieces of Wood and the more recent Mallet Quartet, where two marimbas provide a rock-steady rhythmic pedal against which two vibraphones overlay a series of complex interlocking patterns. ... Synergy Vocals impart a beautiful, haunting performance [in Proverb], whose quiescence quietly defuses the energy and explosiveness of the rhythmic pieces.  Pwyll ap Siôn
Gramophone June 2019