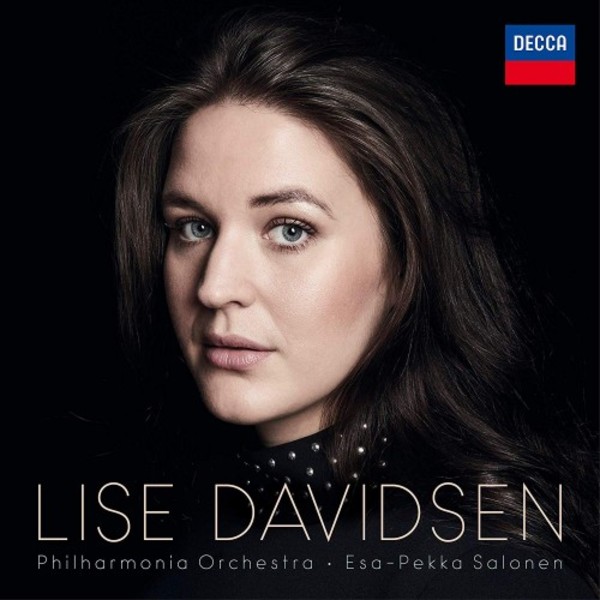 A selection of Richard Strausss most-loved lieder and songs, and Elisabeths arias from Wagners Tannhäuser, the
role in which Lise Davidsen will make her debut at Bayreuth Festival. Plus Ariadnes aria from Strausss Ariadne auf Naxos: her 2017 Glyndebourne debut in the title role was named one of those I was there moments (The Times).

Recorded with the Philharmonia Orchestra, who performed the premiere of the Four Last Songs, and Finnish conductor Esa-Pekka Salonen.

Lise Davidsen is the first Scandinavian soprano to sign to Decca since Birgit Nilsson, and the first Norwegian singer to join Decca since Kirsten Flagstads acclaimed recordings in 1950s.

She is winner of The World Opera Competition, Plácido Domingos Operalia (2015), winner of The Queen Sonja International Music Competition (2015), and Gramophone Young Artist of the Year (2018).
One of the greatest voices I have heard. - The Observer
Hers is truly a voice in a million. - The Telegraph

Since emerging on the international scene in 2015, and particularly since her Glyndebourne debut as Strausss Ariadne in 2017 and being named as Gramophones Young Artist of the year in 2018, the Norwegian lyric-dramatic soprano Lise Davidsen has been attracting huge levels of attention from critics and public alike. Now her first solo disc on Decca reveals why, coupling ten Strauss songs with arias from two of her operatic signature roles, ably partnered by the Philharmonia Orchestra under its outgoing principal conductor Esa-Pekka Salonen.

Ms Davidsen started out as a mezzo-soprano in baroque opera before moving up to the soprano range, which helps to explain why she has such strength in her middle register, as well as gleaming top notes and a tone that combines clarity and focus with warmth and depth, phenomenal breath control, immaculate diction and well-nigh perfect intonation. And despite her youth (she turned 32 in February) she also has abundant musical maturity, as is quickly evident in the opening tracks of this album, Elisabeths arias Dich, teure Halle and Allmächtge Jungfrau from Wagners Tannhäuser. Its a role she has already performed to great acclaim in Zurich and Munich, and this summer it will also form her Bayreuth debut. On the evidence of this disc, audiences on the Green Hill are in for a real treat: Dich, teure Halle is gloriously confident (even if the last inch of Mendelssohnian lightness eludes Salonen), while Elisabeths Prayer Prayer is splendidly heartfelt.

Just as impressive is Es gibt ein Reich from Ariadne auf Naxos, a stellar performance combining majesty, poise and human tenderness, with alert support from the Philharmonias excellent wind section. It also makes the perfect springboard into the selection of Strauss songs that follows. The Four Songs, op.27, receive quite remarkable performances that once again demonstrate the sheer range of Davidsens voice: she and Salonen create a wonderful feeling of tension in the opening Ruhe, meine Seele!, while Cäcilie and Heimliche Aufforderung have real Straussian exuberance to them, and the concluding Morgen! is marvellously rapt and still, Davidsens heart-melting tones matched by the solo violin of Zsolt-Tihamér Visontay. Wiegenlied, op.41 no.1, is a wonder of dynamic control, with the Philharmonia creating some magical textures to support the gently floating vocal line, and the last song that Strauss ever wrote, Malven (Mallows, discovered as recently as 1984) is heard in an effective orchestration by Wolfgang Rihm.

Then its on to what for many will be the main attraction of this disc, the Four Last Songs, premiered in 1950 (less than a year after Strausss death) by an earlier generation of Philharmonia players and another Norwegian soprano, the great Kirsten Flagstad, under the baton of Wilhelm Furtwängler. Thats a performance that survives only in rather compromised sound, so comparisons would be academic, but here Ms Davidsen lies somewhere between the ripe fullness of Flagstad and the more glistening clarity of Lisa Della Casa, Elisabeth Schwarzkopf (now sounding rather arch) and, more recently, Soile Isokoski. This is repertoire for which Davidsen clearly has a natural affinity, and shes not afraid to let the music speak for itself rather than imposing her will on it.

Time and again one wonders at the apparent ease with which the voice rides the waves of the full orchestra, and also the sense of focus it has in the more inward moments. The second and third songs, September and Beim Schlafengehn, are particularly successful, with Nigel Blacks solo horn and Visontays violin respectively playing their part in creating a very special atmosphere. In the concluding Im Abendrot one again misses that last degree of transparency and urgency that Charles Mackerras, for example, regularly brought to his Strauss performances with the same orchestra, but Ms Davidsens rapport with the music is constantly in evidence, and this is surely a performance that will ripen as her experience widens. If she paces herself as steadily as she has done so thus far, hers will certainly be one of the great Straussian and Wagnerian voices of our time, hopefully taking in some of the other great dramatic soprano roles of the repertoire along the way (a Fidelio at Covent Garden is already in prospect). In the meantime, listen to this disc and relish it: it bears witness to an already outstanding vocal talent.

... several of Davidsens versions go straight towards the very top of the playlist. Its not just the voice  though that is special in itself, gleaming and electric in tone, and buoyed by a seemingly endless supply of breath. Its also the way she is able to create a still fulcrum even while all Wagner and Strausss orchestral manoeuvres churn around her.  Erica Jeal
The Guardian 30 May 2019

Davidsen is no ordinary singer. Throughout the whole album one marvels at the voice, its easy grandeur and sheer size, its steely focus and security  all well captured by Deccas engineers. The timbre has a default cool beauty but she can flood it with warmth to fill out a phrase magnificently. These gifts are matched by the maturity, honesty and integrity of Davidsens approach. ... this album only reinforces the fact that she is one of the greatest vocal talents to have emerged in recent years, if not decades.  Hugo Shirley