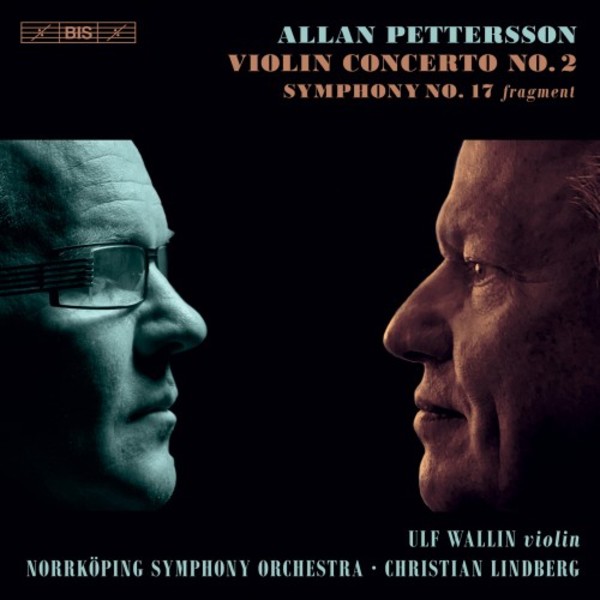 Pettersson - Violin Concerto no.2, Symphony no.17

Symphony no.17 (fragment)
Violin Concerto no.2

Symphony no.17 (fragment)
Violin Concerto no.2

In terms of genre, Allan Pettersson was uniquely single-minded: during his entire career as a composer (195380) he produced only a dozen or so works that were not symphonies. By name, Violin Concerto no.2 is one of these, but it is fair to say that it straddles the divide. Pettersson himself remarked: In reality my work was a Symphony for violin and orchestra. From this results the fact that the solo violin is incorporated into the orchestra like any other instrument. It should therefore not come as a surprise that Christian Lindberg has chosen to include this massive 53-minute work in his acclaimed and award-winning series of Petterssons symphonies, realised in collaboration with the Norrköping Symphony Orchestra.

The Concerto was written in 1977, 28 years after its predecessor, the Concerto for Violin and String Quartet (1949). In that work, written while Pettersson was still studying, the composer was experimenting with radical ideas that are not to be found in his later compositions. Concerto no.2 is rather characterized by the central role given to one of Petterssons Barefoot Songs  a trait that appears in several other mature works. Throughout the score, the song The Lord walks in the meadow provides motivic material but is also quoted extensively. The hugely challenging solo part was first performed by Ida Haendel in 1980, and is here taken up by Ulf Wallin, who with an extensive discography has already proved himself to be one of the most intrepid violinists of today.
The disc closes with Petterssons last musical thoughts: a 207-bar long fragment generally regarded and referred to as a sketch for the composers Seventeenth Symphony. The fragment has been performed in public on one or two occasions, but it is only now that a wider public is given the opportunity to hear it.

Since it started some ten years ago, the series of Allan Petterssons orchestral music from the Norrköping Symphony Orchestra under Christian Lindberg on the BIS label has been acclaimed by critics and collectors alike. Having already recorded most of the symphonies, the team now turn their attentions to the Violin Concerto no.2 (1977). Pettersson (19111980) started his career as a viola player, so he knew a thing or two about writing for strings. His first Violin Concerto (1949) had been written for the combination of solo violin and string quartet, a musically radical but chamber-scale work in an unmistakably modernist idiom. By the time he returned to the genre, Pettersson was established as an important symphonic composer, and this time he uses a full orchestra in combination with what can better be described as an obbligato solo violin rather than a virtuoso soloist in the conventional sense.

Not that the work is without its challenges  for soloist or listener  for the violin plays without rest for most of the Concertos 53-minute uninterrupted span. Yet it is hardly deployed in the normal soloist-tutti dialogue manner. Rather, this is more akin (as the composer himself seems to have recognised) to a vast one-movement symphony with obbligato violin: the soloist is at times all but inaudible against the full orchestral textures, at others weaving in and out of earshot, but rarely performing the conventional functions associated with a concertante role. Happily, issues of audibility and focus are splendidly handled by the BIS team, helped by the fact that Lindberg and the Norrköping orchestra are now enormously experienced in Petterssons strikingly individual music, and that they use the revised version of the score which addressed some of the pieces thornier problems. And it helps, too, that the soloist is the veteran Ulf Wallin, a pupil of Wolfgang Schneiderhan, no less, well known and widely praised for his commitment to 20th-century and contemporary music.

Wallin turns in a blazingly intense but well judged and expertly paced account of the demanding solo part, technically superb throughout, and that intensity and proficiency is matched by the orchestra. As with Petterssons other mature works, this concerto progresses from an uncompromisingly atonal idiom to a resolution that is distinctively but imaginatively tonal. (One can hardly talk in the usual terms of tension and release in such an unconventional concerto.) In this case, the resolution comes in the form of one of the composers own Barefoot Songs, which is liberally quoted from, particularly in the closing Cantando section (track 4 on the present recording). It provides the work with a surprisingly satisfying conclusion, and Wallin, Lindberg and the orchestra do it proud. As the only recording of the work in the current catalogue, this inevitably sweeps the board, but it would probably do so even if the couple of earlier accounts (including that by Ida Haendel) were still available, thanks also to the excellent modern sound and engineering.

What will make this release especially attractive to Petterssons many admirers is the coupling: a performing edition by Lindberg and Markus Brylka of the surviving fragment of Petterssons unfinished Symphony no.17, left incomplete at the time of his death. Its a punchy seven-minute torso that peters out (no pun intended) rather like the incomplete final fugue of JS Bachs Art of Fugue, leaving the listener wondering what might have been. For collectors of this series, its certainly essential listening. Coupled with the Concerto, it should tempt many others to explore Petterssons tremendously compelling soundworld.