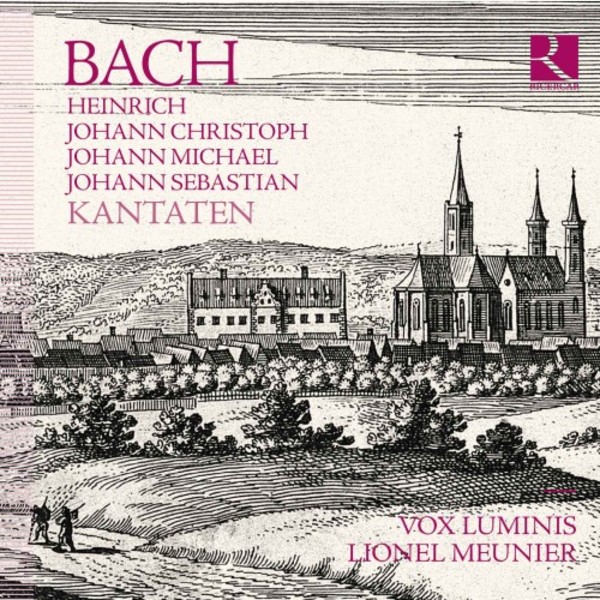 Having recorded the complete motets composed by the ancestors of Johann Sebastian Bach (RIC347), Vox Luminis now tackles their complete spiritual concerts and sacred cantatas, in which the instruments  particularly the strings  play a highly important role. In the cantata for the Feast of St Michael the Archangel by Johann Christoph Bach, trumpets and drums are enlisted to evoke the battle of the archangels in heaven. To round off this programme, Vox Luminis presents the cantata Christ lag in Todesbanden by Johann Sebastian Bach, in its original version dating from his Arnstadt period, containing copious elements linking it to the music of his forebears.
"Vox Luminis's blend is marked by a pleasing astringency in the alto line, and supple singing from the sopranos and baritones, Meunier among them...over two hours of outstanding musicality and serious musicianship."  BBC Music Magazine on RIC347

In recent years the vocal-instrumental group Vox Luminis have positioned themselves among the leading performers of Baroque vocal music. Their recent recording of Purcells King Arthur won high praise, and their discs of masterpieces from the German Baroque  from Schütz and Scheidt to JS Bach and Handel  have been consistently impressive. Now they follow up their earlier exploration of music from Bachs familial predecessors (a double-disc of Bach family motets) with a single disc of sacred concertos and cantatas. During the 17th century, a gradual transformation of the compact but often multi-sectional spiritual [or sacred] concerto (choral and solo voices with concertante instruments) into the more expansive, multi-movement cantata took place, and the examples on this splendid new disc illustrate this well.

While the music of Bachs sons is now much better known than a generation ago, the compositions of his forebears is still underappreciated, but Vox Luminiss immensely stylish and engaging performances should help to change that. The earliest music here is by JS Bachs great-uncle, Heinrich Bach (1615-1692): the sacred concerto Ich danke dir Gott, with five-part vocal ensemble and five-part strings (two violins, two violas and continuo). Homophonic and virtuosic antiphonal passages alternate most effectively, making one regret that so few examples from Heinrichs pen survive.

The other two early Bachs represented here are Heinrichs sons Johann Christoph (1642-1703) and Johann Michael (1648-1694). The latter contributes two sacred concertos: the uplifting Herr, der König freuet sich is written for double-choir and five strings, and abounds in Venetian-style polychoral effects on a small scale. Ach bleib bei uns, Herr Jesu Christ, which opens the disc, is written for just four voices, but with six-part strings (three violins, two violas and violone), and the exchanges between the top two violins in the introductory sinfonia at times bring to mind Monteverdi.

Impressive as these works are, they are overshadowed by the music of Johann Michaels brother, Johann Christoph. Described by JS Bach himself as a profound composer, he is the most outstanding composer of the early Bachs, and three of his works feature here, all of high quality. Die Furcht des Herren is scored for double-chorus, strings and continuo, while Herr, wende dich und sei mir gnädig is for solo and ripieno quartets of singers plus strings and continuo. This is deeply absorbing music, and its expressive profundity and rich sonorities are enhanced (as is all the music on the disc) by the inclusion of a substantial organ continuo in the Thomas organ in the church of Notre-Dame de la Nativité in Gedinne, Belgium. Most immediately impressive of all, however, is the St Michaels Day cantata Es erhub sich ein Streit, for double choir plus 3 violins, 3 violas, bassoon, four trumpets, timpani and continuo! Trumpets and drums thrillingly accompany the vocal forces to give a vivid portrayal of the struggle of good (the angels) to overcome (the dragon, as personification of the devil). Like Herr, wende dich, this is an expansive work with plenteous examples of the invention and the expressive and harmonic daring that JS Bach evidently admired.

Before that rousing conclusion, Vox Luminis perform what may well be JS Bachs earliest cantata, the Eastertide Christ lag in Todesbanden, BWV 4, probably written in Arnstadt before Bach took up his post as organist at St Blasiuss Chucrh in Mühlhausen. Bach himself thought highly enough of this archaically-styled work to revive it in his later years at Leipzig, but here Vox Luminis perform it in its earliest scoring with just two violins, two violas and continuo for support (i.e. without the later addition of trombones). Even in this early form, the work makes a huge impression, with clear debts to the composers predecessors (as there are to Johann Pachelbel), but already exhibiting some notably Sebastianesque thumbprints like the symmetrical formal plan and the sheer quality of inventiveness. Thanks to the context of the rest of the disc, the listener can appreciate the boldness of this 20-minute cantata (the longest single work on the disc) even more fully than usual. Fine solo and duet work, a marvellously (but not over-) blended choral sound and brilliantly executed instrumental parts all make this a disc to treasure: an immensely rewarding exploration of the Bachian hinterland, and quite possibly Vox Luminiss finest disc to date.

These Bach family cantatas capture what Vox Luminis does best. When singing as an ensemble, the vocalists draw us into intricate works with a pellucid yet robust timbre. Details register with ringing clarity, whether as motifs passing between soloists, as the creamy blend of voice with instrument in a shared line, or as the joint of breath to explore a rhetorical pause. ... In this project Vox Luminis celebrtaes not just the Bach family, but the power of music-making itself.  Berta Joncus (Recording of the Month)
BBC Music Magazine September 2019

With its transparent, flexible, indeed luminous sound, [Vox Luminis] is rather different from English ensembles. ... Some of these pieces have been recorded before, notably by Musica Antiqua Cologne (DG Archiv), but whereas those performances under Reinhard Goebel were instrumentally led, these new ones are vocally led and sound freshly minted.  Nicholas Kenyon
The Guardian 30 June 2019

One of the key differences between Vox Luminis and many other such ensembles (particularly those of the pioneering generation of the 1980s and 90s) is how homogeneity is challenged as the default priority. As you can hear in [Johann] Christophs dialogus Die Furcht des Herren, there is no shortage of purple-rich blend and supreme tuning but, alongside, singers and instrumentalists are expected to react, copy or dissent, according to both the text and the abstract direction of the music. The strong identities within the ensemble allow for new lyrical dimensions to emerge here... Its deeply affecting. ... [In Christ lag in Todesbanden] Lionel Meunier lets the music breathe, always resisting forced or mannered declamation. ... Throughout this beguiling programme, Vox Luminis inhabit a world from which youll need to drag yourself away.  Jonathan Freeman-Attwood
Gramophone August 2019