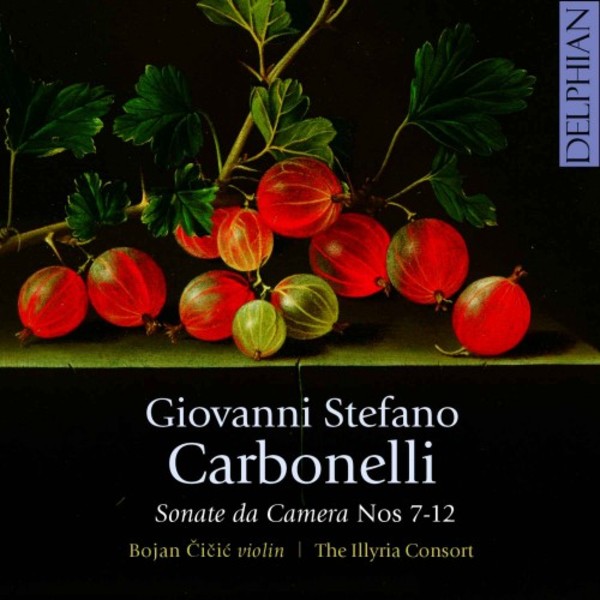 With their debut recording on Delphian, Bojan Čičić and his Illyria Consort propelled the name of Carbonelli from obscurity into the classical charts, recapturing the excitement which the violinist-composer stirred up in eighteenth-century London.

Now they bring to Carbonellis other six surviving sonatas the same intelligence, sensitivity and sheer, exhilarating virtuosic brilliance with which they proved him to be so much more than just a follower of Corelli or contemporary of Vivaldi. For good measure they add in a fine concerto by the latter that bears Carbonellis name, and which amply demonstrates the respect in which he was held in his native Italy before setting off to find his fame and fortune in England.

During the 18th century, a steady stream of Italian violinist-composers settled in London, attracted by the seemingly limitless professional opportunities offered by the city's vibrant musical scene at the time. Whether in the service of wealthy patrons, as public virtuosi, teachers or published composers, there was plenty to divvy up, and to diversify into should one particular revenue stream run dry. Among the best known figures were Matteis, Geminiani, Giardini and Viotti, but until recently Giovanni Stefano Carbonelli (1694-1773) was one of the more obscure individuals on the list. He arrived in London in 1719 and enjoyed the patronage of John Manners, 3rd Duke of Rutland. After a period leading the orchestra of the Drury Lane theatre he went freelance, often leading Handel's oratorio orchestras, and was himself a composer of concertos and sonatas. Of these, only a set of twelve violin sonatas (Sonate da camera), originally published in 1729, now survive. Naturalised in 1735 as John Stephen Carbonell, he later changed career direction entirely, becoming a successful wine merchant.

Carbonelli's music lay in almost complete neglect for centuries, until Bojan Čičić and his Illyria Consort recorded the first six of the violin sonatas on a critically acclaimed recording for Delphian in 2017. They followed up that success with a disc of 'London' Concertos by the intriguing Giovanni Giornovich in spring 2019. Now Čičić and his enterprising colleagues return to Carbonelli for the last six of the sonatas, and they are every bit as entertaining and beguiling as the first half of the set. Unlike sonatas 1-6, which despite their title had distinct overtones of the church sonata (sonata da chiesa) genre thanks to the inclusion of fugal movements, sonatas 7-12 are much more firmly in the da camera style. Three of them (nos. 7, 10 and 11) include a Giga (jig) movement, a genre beloved by contemporary British and Irish audiences, and all of them include recognisable dance types such as the allemanda, corrente, sarabanda and gavotta. This proliferation of dance movements lends these works a relaxed buoyancy that is immediately engaging, especially when performed with such flair and lightly-worn virtuosity as they are here. Most are in the four-movement Corellian form, usually following the slow-fast-slow-fast template, but there is variety aplenty, likewise enhanced by a continuo group that variously includes theorbo, archlute and baroque guitar (all played by David Miller), harpsichord and organ (Stephen Devine), and Susanne Heinrich on a 7-string bass viol.

Musically these works range from the graceful and stately no.7 in A major, via the pastoral tones of the structurally inventive no.8 in G major and the dark, turbulent no.10 in G major, to the splendidly Vivaldian five-movement no.11 in A major (enlivened by the participation of guitar), and the three-movement no.12 in B minor, which concludes with an impressive Air and variations bringing the cycle as a whole to a satisfying close. Čičić is constantly alive to the variety of moods in these sonatas, well versed as he is in the niceties of period style, and he is equally accomplished at handling their often considerable technical challenges, including multiple-stopping and rapid string-crossing. His tone has a sinewy strength which is nevertheless capable of great beauty in the more reflective movements, and his colleagues are just as sensitive and accomplished. Often arresting, sometimes soothing and always entertaining, these are performances to enjoy over and over again.

Carbonelli may have been closer musically to Corelli in many ways, but he was clearly also admired by Vivaldi (his senior by 16 years). As a considerable bonus this dazzling disc opens with Vivaldis Violin Concerto in B flat major, RV366, subtitled Il Carbonelli and evidently played by the young violinist in or around 1716 in Venice, and later taken up by Vivaldis star pupil Anna Maria at the Ospedale della Pietà. Here the Illyria Consort, enlarged in the outer movements to eight players, deliver the work with tremendous aplomb, Čičić again dispatching the solo part with great style and verve (especially the ear-catching bariolage in the finale).

Anyone who has heard the first disc in this cycle will know what to expect, and will certainly not be disappointed by this marvellous, enthralling follow-up. The recording, made in St Martins, East Woodhay by Delphians Paul Baxter, does the musicians ample justice and is attractively presented, with notes by Vivaldi and Carbonelli expert Michael Talbot. Immensely enjoyable from start to finish.