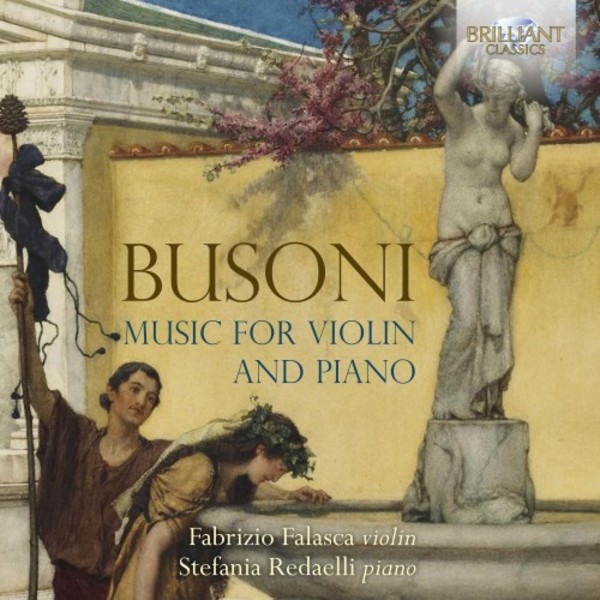 Busoni - Music for Violin and Piano

A new recording of Busonis complete output for violin and piano by a violinist in demand with the worlds great orchestras.

Assistant leader of the Philharmonia Orchestra since 2016, Fabrizio Falasca studied with Salvatore Accardo at the Walter Stauffer Academy and has subsequently played chamber music with him on many occasions. He has made concerto appearances across Europe and in the USA, China and Souther America, as well as making appearances as leader of the Suisse Romande and BBC Philharmonic orchestras, among others.

For his debut on Brilliant Classics, Fabrizio Falasca has chosen to record the two sonatas by his countryman Ferruccio Busoni. They form separate landmarks in Busonis career despite their relatively close opus numbers. Adolf Brodsky accepted the dedication of the First Sonata op.29 from the 24-year-old Busoni despite being the pre-eminent German soloist of his day; but then the composer had a prodigious childhood behind him and could already be counted an experienced composer  as one may hear from the Sonatas sophisticated translation of sonata form and its references to the German musical tradition from Bach and Mozart onwards.

Also from this early period but much less familiar is the collection of four graceful Bagatelles which Busoni dedicated to the seven-year-old Egon Petri, who would become, as a pianist, the composers foremost disciple and interpreter on record. Both works, however, shrink somewhat beside the mastery of the Second Sonata which Busoni completed in 1898 shortly before the move to Berlin where, as a teacher, he would exercise a decisive influence over a generation of composers and performers. The Sonata opens with a serene and intensely lyrical slow movement, followed by a brief and Beethovenian bridge to the keystone of the sonata, a spacious set of six variations on a Bach chorale. Here is all the depth of feeling, dark humour and harmonic ambiguity that underpin Busonis mature style.
Pianist Stefania Redaelli collaborated with famous soloists such as Cecilia Bartoli, Salvatore Accardo and Viktor Tretiakov.