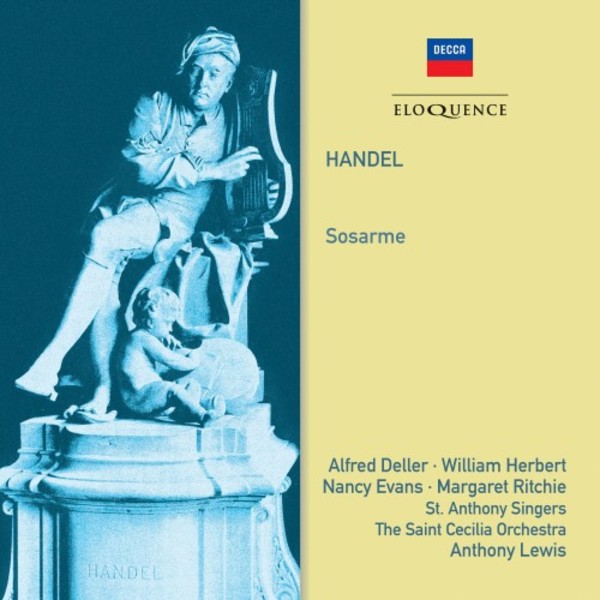 Alfred Dellers only complete recording of a Handel opera. First staged at the Kings Theatre in London in February 1732 and revived two years later, Sosarme was not heard again in full (if not entirely complete) until a BBC broadcast in January 1955, conducted by Anthony Lewis. Conductor and performers then made this recording a month later under the aegis of Louise Hanson-Dyer and her LOiseau-Lyre label.

Though not the best exemplar of Handels skills as a musical dramatist, according to the Handel scholar Anthony Hicks, Sosarme consistently illustrates his greatness as a composer. The greatest riches of the score are found in the exquisite arias for Sosarme and Elmira, and above all in their two duets, the first of which (Per le porte del tormento in Act 2) transcends its context with music of piercing radiance. It was this recording of Sosarme that introduced many listeners to Alfred Deller (1912-1979), and to countertenors in general. Dellers unmistakable instrument embodied, by its seeming effortlessness, the art that conceals art. When the harpsichordist and conductor Gustav Leonhardt was once asked whether he had ever allowed anyone to tell him how to perform anything, he replied, only Deller.

Deller was joined by a cast of British singers who made, with Lewis, several other recordings for LOiseau-Lyre that cast both well-known and unfamiliar music in a new and historically informed light. Several have been reissued by Eloquence: among them Semele (4827449), The Fairy Queen (4825063) and sacred works by Couperin (4828542) and Mozart (4825041).

Some of the finest Handel singing and playing on disc ... Listen, for instance, to Anthony Lewiss handling of the Allegro of the overture for an ideal blend of impetus and inner power, to Margaret Ritchies Rendil ciglio for exemplary control and expression, to Alfred Dellers In mille dolci modi for exquisite ravishment. And of course, to that famous rendering of the duet Per le porte del tormento in which the talents of all three combine in a perfect realization of its unearthly serenity.  The Musical Times, July 1972

Sosarme should cause a good deal of excitement ... LOiseau-Lyre has assembled a brilliant cast.  New York Times