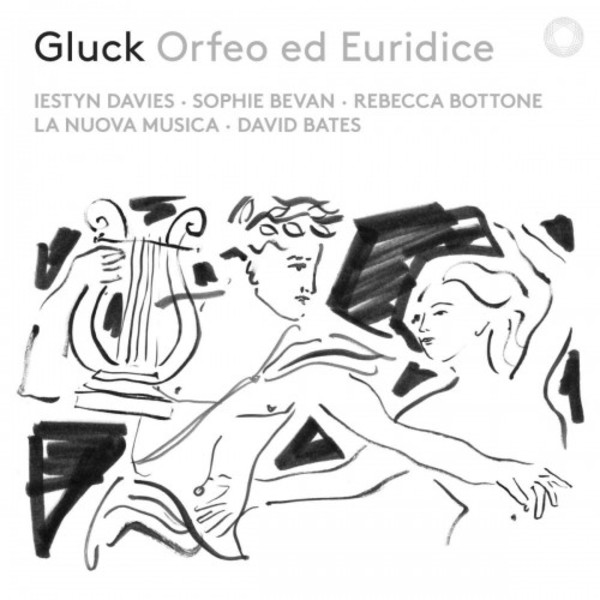 La Nuova Musica presents a new live recording of Glucks Orfeo ed Euridice, with countertenor star Iestyn Davies singing the title role. Once created to reinstate the noble simplicity and calm grandeur of ancient Greek culture, the opera continues to delight audiences with its direct and unpretentious appeal, epitomized by the world-famous aria Che farò senza Euridice. This live recording presents the original 1762 Vienna premiere version of the opera, with Glucks exquisite evocation of the Elysian Fields from his 1774 Paris version as a small addition.

La Nuova Musica and its artistic director David Bates are among the most exciting young Baroque ensembles of our times. For their first Pentatone recording, they work together with three exceptional vocalists: countertenor Iestyn Davies and sopranos Sophie Bevan and Rebecca Bottone.

The Orpheus myth, with its vivid illustration of the power of music as well as love, has held fascination for composers from the very beginnings of opera to the present day. From Peri, Caccini and Monteverdi to Birtwistle (whose Mask of Orpheus is currently set for a timely revival), it has given rise to many of the landmark works in the genre, none more enduringly popular than Glucks Orfeo ed Euridice. The result of the joint creative efforts of Gluck himself, the librettist Calzabigi, choreographer Angiolini and designer Quaglio, all drawn together by the intendant of the imperial theatres in Vienna, Count Durazzo, it was the first of the great reform operas which sought to introduce a new balance and naturalism to the genre to counter the high stylisation (and endless succession of recitatives and arias) of the Italian baroque opera seria. In recent years, the availability of high-quality singers and orchestras well versed in period style has led to a revival in fortunes for both the original Vienna version of Orfeo ed Euridice (1762) and Glucks own French-language revision and expansion for Paris (Orphée et Eurydice, 1774). But it is arguably the Vienna version, as urgently concise as it is winningly expressive, that most readily conveys the bold originality of the work, and this is the version chosen for the staggeringly impressive new recording of the opera on the Pentatone label.

Joining David Bates and his excellent period group La Nuova Musica is star countertenor Iestyn Davies, whose velvety voice is ideally suited to a role in which the ability to melt the hearts of furies and spectres combines with the need to convey fundamentally human passions, hopes and fears. It is not just in the honeyed tones of his ballad-like songs (Chiamo il mio ben così, Deh! Placatevi con me, Che puro ciel and above all the heart-stopping Che farò senza Euridice) that Davies excels, but also in the urgency of his delivery in the more declamatory passages, revealing a beating heart and burning love while never overstepping the limits of classical propriety. This is an account of the role that brings to mind contemporary descriptions of its first creator, the great mezzo-soprano castrato Gaudagni, famed for his acting skills as much as for his singing voice. Davies brings Orpheus unerringly to life, in an opera in which, for all its mythological setting, humanity is everything.

Alongside Davies, soprano Rebecca Bottone is a vivacious Cupid, her Act 1 aria Gli sguardi trattieni delivered with just the right degree of teasing knowingness. Sophie Bevan is a radiant EurIdice, impassioned, spirited and, in her crucial Act 3 aria Che fiero momento!, a whirlpool of emotions and doubts, all delivered with intense musicality and stylishness. In the operas first two acts it is the chorus that, together with Orpheus himself, takes the main musical burden, and the voices of La Nuova Musica are ideally balanced and consistently alert, whether as mourners, furies or the spirits of the Elysian fields. Their stern responses to Orpheuss pleading in the Hades scene are thrillingly incisive, while judicious use of thunder sheets and a wind machine makes the journey from the opening scene to the Underworld a vivid one. The choruss reappearance for Calzabigis happy ending has a toe-tappingly festive feel to it.

Under David Bates, the Nuova Musica orchestra works wonders with Glucks restrained yet masterly scoring, from the funereal cornett and trombones of the opening to the flutes and harp that make such a crucial part of the operas soundworld. Particularly moving is the echoing of Orpheuss voice by the flutes in Chiamo il mio ben così, while the ever-popular Che farò senza Euridice receives a performance that resonates long after the opera has finished. The Pentatone team, headed by producer Jonathan Freeman-Attwood and engineer David Hinitt, have done an exceptional job in capturing the opera live from a May 2018 performance in St Johns Smith Square, without any intrusive noises, and the accompanying booklet contains the full Italian libretto with an English translation. Amazingly, even with the addition of one instrumental number from the 1774 Paris revision (track 28), the entire opera is accommodated on a single disc of 8833, allowing the listener to enjoy this exceptionally moving yet compact opera at a single sitting. Outstanding even in a competitive field, this is a performance that deserves to be heard by opera lovers everywhere.

The soloists are magnificent. Iestyn Davies sings smoothly throughout, hitting top Ds and Es with no sense of strain. ... Sophie Bevan comes across powerfully, getting more and more stroppy as she rails at Orfeo for not looking at her. Rebecca Bottone has a perfect voice for Amore (Cupid), light and bright. ... High praise, then, for David Bates and his ensemble.  Richard Lawrence
Gramophone December 2019